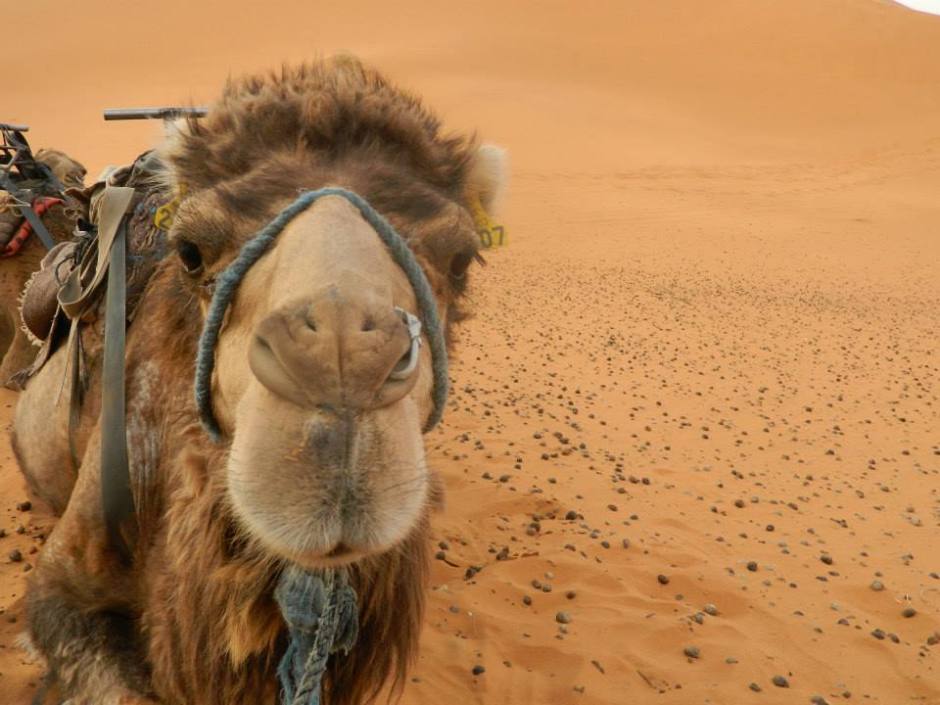 After two long days of travelling across Morocco from Marrakech, we arrived on the edge of the Sahara Desert.  My heart sank a little, for the first time since arriving in the country, the clouds started rolling in.  I had envisioned riding through the desert on the back on my camel, taking photos of its shadow on the sand and suddenly this all seemed to be crashing down around me.  I’d even read about tours that had to be cancelled due to bad weather.  I really didn’t want this to happen to me!

There are several different Marrakech desert trips on offer to various parts of the Sahara Desert in Morocco.  After some research I decided that the Erg Chebbi dunes were the part for me and booked on a 2 night trip with CamelTrekking.  I had read reviews on the company that were all very positive but I was kinda wary when the only way to pay was via a bank transfer.  My instinct told me it was OK though and I’m glad I listened because the tour was A.MAZ.ING!

I wrote a whole post about the first part of the tour, about the journey between Marrakech to Merzouga and the places we visited on route. We spent the first night at a hotel in the Dades Gorge, the second night in the Sahara Desert and the 3rd day was spent driving the whole way back to Marrakech in one hit, arriving back in the evening.

Arriving In Merzouga/The Edge Of The Sahara Desert

The weather held off long enough for us to meet our camels and head off on the hour long journey to the Bedouin tent camp, our accommodation for the night.  I hadn’t been on a camel before and had only been on a horse twice in my life (and I hated it both times!), but was surprised at how safe I felt on top of the camel.  They plodded over the sand and made light work of the ups and downs of the dunes!

We were told before the tour that we’d only be able to take an overnight bag with us for the whole trip, there wouldn’t be enough room in the vehicles for a lot of luggage.  We all took a regular sized backpack which they hung off the handlebars.  Our water bottles were shoved under the make shift saddles.

I even felt brave enough to let go, essentially being hands free, so I could use my camera to be able to get as much photographic evidence of this once in a lifetime experience.  The sun even poked out long enough for me to get my shadow picture.

It was a good job I had a new found camel riding confidence, as we neared the camp, the Berber guide in control of the camel train behind mine, thrusted me the reigns, suddenly I was ‘walking’ a line of 8 camels, while he ran off ahead, argh!

As much as I was wanting the riding section to be over, I was dreading it too!  I admit, I may have let out a little scream when the camel finally sat down onto its front legs so I could slide off its back and be reunited with the solid ground!

The wind started to pick up as the group were assigned a tent for the night.  With child like wonder, everyone literally threw their backpacks into the doorway and headed straight for the nearest dune.  It was tough.  Scaling up sand is hard at the best of times, but when it’s head on into a sand storm, there was an added joy of a face full of sand that felt like hundreds of tiny little pin pricks poking your skin.  It was hard to see and hard to breathe!  Those that made it to the top were greeted with a sight that just made you feel so small, everywhere you looked was just a big sea of orange.

We couldn’t stick it for long because of the wind, so after a quick run down the side of the dune, we headed for shelter in the more sturdier ‘meal tent’.  Over a dinner of mint tea and tagine, the group bonded over discussions of life at home and what brought them to Morocco.  Only the drum party around the fire was cancelled, there was no sign of the wind laying off, it was set for the night.  It scrapped the star gazing plan too. 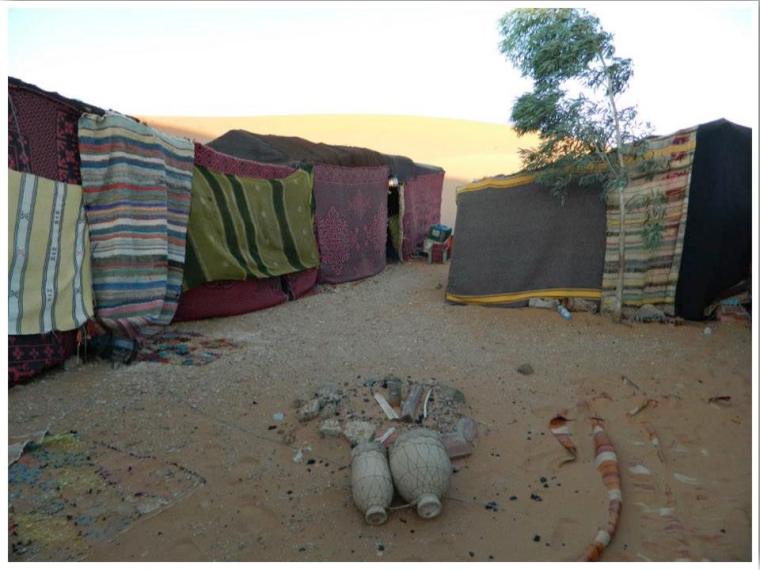 After trying to secure the flapping of the walls with the small amount of luggage we’d taken with us, we crawled under the blankets and attempted to get some sleep.  It was obvious there wasn’t going to be much of it.  The temperature began to drop, the wind was still howling and a big hole in the roof of our tent, meant that it just rained sand CONSTANTLY.  There was even a kitten meowing and running through the tents…no, there really was a kitten, I wasn’t going mad!

I managed to get maybe an hour of sleep, I looked at my watch, it wasn’t far from sunrise, the wind had died down, so I decided to scale the dune and sit on the top and wait for the sun to come up.  I had the place to myself.  I was the only one awake and I’ve never experienced the feeling of peace like it.

Slowly more people began to surface and the sunrise didn’t disappoint.  The world around me became more and more orange, the angle of the sun highlighting every little dune.  There was a short time to enjoy it, before getting in some breakfast, jumping back on the camels and heading back to reality and the long drive back to Marrakech.

The views on the way back to the vehicles were unreal, the lighting was perfect and the dunes were covered in patterns made by the wind.  Made you realise how much of an ever changing environment the Sahara Desert really is.

My desert tour may have not gone 100% as planned (but then travel rarely does!) but I wouldn’t have changed my experience for the world, it’s given me life long memories, and hey, I got to experience a sandstorm in the Sahara!

My 2 night Morocco desert tour cost 150euros and included all accommodation, transport and meals.  There are other companies that offer different levels of desert ‘glamping’ and different tour durations but I was more than happy with what I had.  Since my trip I do believe that the camp that CamelTrekking use has been updated slightly. 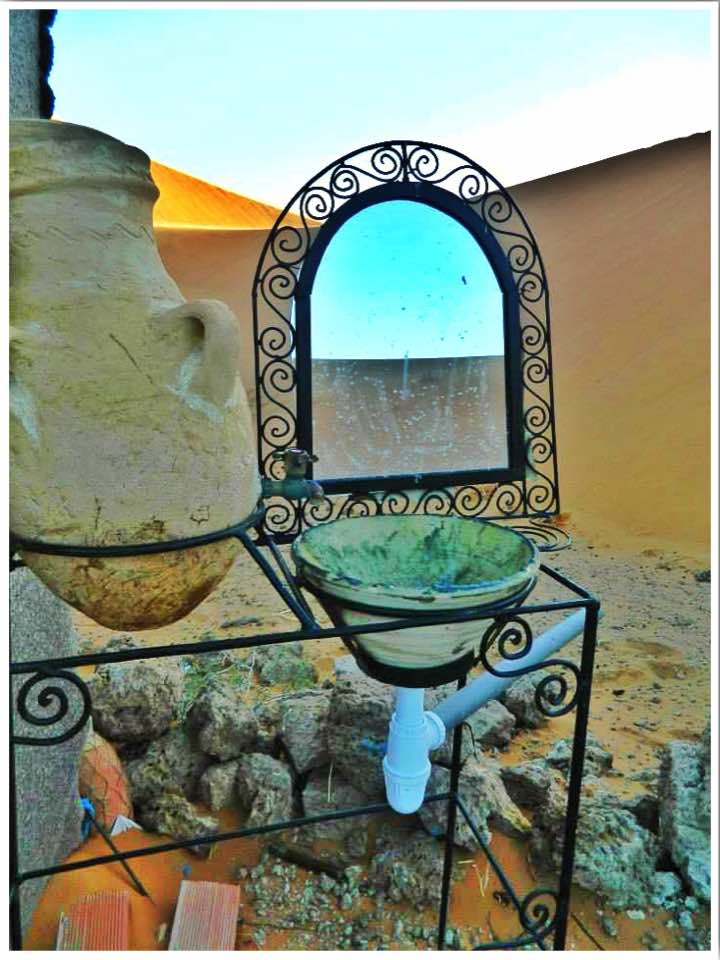 Where to Stay in Marrakech

I stayed at the Riad Chouia Chouia in the Old Town Medina.  I really enjoyed my stay but I don’t think I would have been able to find it by myself!  They offered an airport pickup, which we accepted which then meant they walked you right to the front door.  I felt this was the safest option and the poor driver even sat at the airport while our flight was delayed (we had to land in Lisbon, Portugal on route due to a crew ’emergency’!)

Other Sand Dunes Around The World

Any questions about camping in the Sahara Desert or Morocco in general? Let me know in the comments below!

Inspired to go on a desert tour in Morocco? Pin it for later! 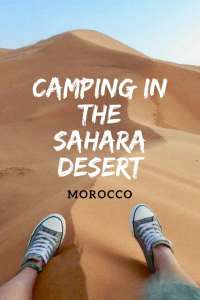 14 thoughts on “Morocco Desert Tours: Things I Wish I’d Known Before Camping in the Sahara”