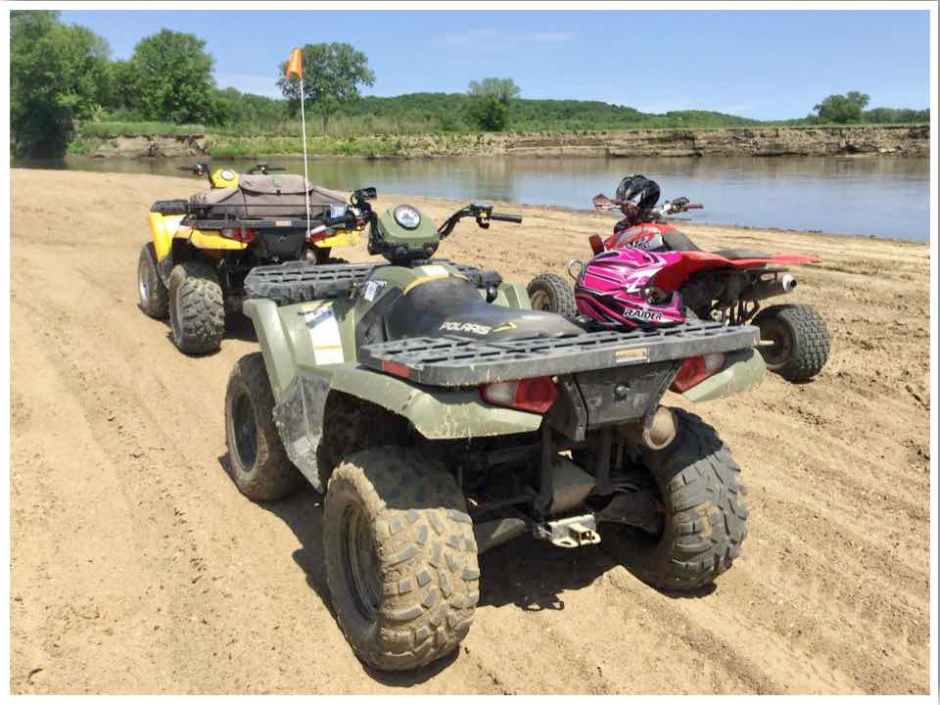 I’ve been a huge fan of quad biking (ATVs) for a long time, going on ATV tours all around the world. While living in Iowa, we bought our own ATV so we could go trail riding! OHV parks tend to be free to visit and are under the control of the DNR. In these locations you’ll need a state registration sticker on the ATV, your vehicle must meet a couple of requirements (for example, have a width of less than 65 inches) and you have to wear a helmet. On private property, there aren’t quite as many rules but you’ll usually have to pay to ride on their trails. I prefer to trail ride, rather than going to a park. With trail riding you can follow a route or track through the woods and just enjoy driving around. Some of the OHV parks tend to be taken up mainly with terrain parks that are aimed more at dirt bikes. Here are some of the ATV parks in Iowa that we’ve been to!

Out of the parks that I’ve been to in Iowa, River Ridge ATV Trails is my favourite! It covers 200 acres and has 21 miles of trails. As it is private property, there is a charge for each rider. As you turn into the gate, there’s a car park on the left hand side. If the owner isn’t around, there’s a mailbox next to the porta potty. Inside are waiver forms and trail maps. He told us that if he wasn’t around we could just fill out one waiver for our whole group (each rider has to sign it) and then fold it up, leave the money in the middle and put it back into the mail box. You are then free to stay all day until dusk. Most riders were in UTVs (side by sides).

The Whispering Meadows Resort is also on the property. This is a cabin rental (with a hot tub!) and regular riders are asked to stay away from this area, just for the guest’s privacy. However I got lost and ended up in the trails around the cabin! The only access I could find to this area, unless you are a guest, is to go through a stream water crossing. It’s pretty hairy, so if you don’t want to chance going through it, then you can’t really reach this section of trails.

The majority of the trails for normal visitors are on the opposite side of the gravel road. There’s a perimeter trail on the edge of the woods which was a lovely ride, or you could go through the woods where they had more twists and turns and objects like trees and logs to avoid.

A great part of the River Ridge ATV Trails is the sandbar area alongside the Maquoketa River. People were of course driving around in the sand, but you could also hang out in this area: swim, fish, have a picnic etc.

As well as the cabin rental, you can also take your own camper and stay in the main parking area for an additional fee.

The nearest gas station, Andrew Country Mart, is located in Andrew which is a 10 minute drive (7 miles) away. Maquoketa is a larger town that is an 18 minute (12 miles) drive and has grocery stores, Theisen’s, O’Reilly Auto Parts, restaurants and fast food outlets. Maquoketa Caves State Park is worth a visit too.

Tama County OHV Park is on a bigger acreage than River Ridge (300 acres) but it has less trails, totalling around 15 miles. The large campground is included in the size of the park, even though it’s not a rideable space. In the parking area are 2 large ‘long drop’ toilets (1 male, 1 female), I was impressed at how clean they were and both had plenty of toilet roll during our visit.

We visited not long after all the rains in 2019. The section of the park on the same side as the parking area was flooded and very muddy, so we were unable to reach most of the trails in this area. There is a trail under the main road to get to the trails on the other side, but we couldn’t get across as a large tree had fallen down and was blocking the way! Someone from the City happened to be in the area and he gave us permission to drive across the main road to get onto the other side instead.

The area was mainly woodland trails rather than longer routes you can follow. Lots of twists, turns, logs and trees. After the rain it was very muddy but we never got stuck. There is a small perimetre trail for those that like to pick up a bit of speed.

Right opposite the entrance of the OHV park is a Phillips 66 gas station and a small convenience store, which is handy if you need extra fuel or even just a drink or a snack. The town of Tama is less than 1 mile away and has a couple of small stores.

Riverview OHV Park is the smallest of the ATV parks that I’ve visited. It covers 180 acres but only has 5 miles of trails. It’s mainly terrain parks for dirt bikes but it has a 4 mile perimeter track that is a nice ride. There’s a very large parking area with 2 ‘long drop’ toilets (1 male, 1 female), again kept fairly clean.

Most of the perimeter trail is sand, I actually prefer riding on sand compared to mud! There’s also an area in the woods with some mini ‘jumps’, that are great for ATVs. Other than the perimeter trail, there’s not really many places to explore for visitors on ATVs. You’ll also come across signs for trails and cut throughs that are only for dirt bike riders. For this reason, Riverview is very popular with motorcross and dirt bikes. There were only a couple of other ATVs during our visit. There’s also a barrier that you have to pass through to get to the perimetre trail, so make sure your vehicle is definitely under 65 inches wide!

Riverview OHV Park is very close to the city of Waterloo. The nearest gas station is the BP which is 1 mile from the park entrance. There are many stores, restaurants and fast food outlets all close by. I have a guide for Fun Things To Do In Waterloo Iowa (& Cedar Falls) that you may find useful.

Lakeview OHV Park is another that is overlooked by the DNR and is located in Solon. It’s another small park at 147 acres but it said to have 10 miles of trails, which is double the amount of trails that Riverview OHV Park has!

We discovered River Ridge ATV Trails after Hansen Hallows was closed on the day we wanted to visit, but we still want to visit! It’s another private property that sits on 400 acres (the biggest out of the ATV parks listed in this post) and has 15 miles of trails. It is only open on the weekends though and they do recommend calling before you visit. It closes on rainy days and when they are holding special/private events.

Inspired? Pin these ATV trails and parks in Iowa for later!

2 thoughts on “OHV Parks and ATV Trails In Iowa USA”