When planning our road trip through Colorado, we were after a location for a stopover that was just off the Interstate so had our eye on Colorado Springs.  After a little bit of searching I discovered Manitou Springs, right next door, gave us the ‘same’ location, only with a more smaller mountain town feel, rather than a larger city.

Things To Do In Manitou Springs

Garden of the Gods 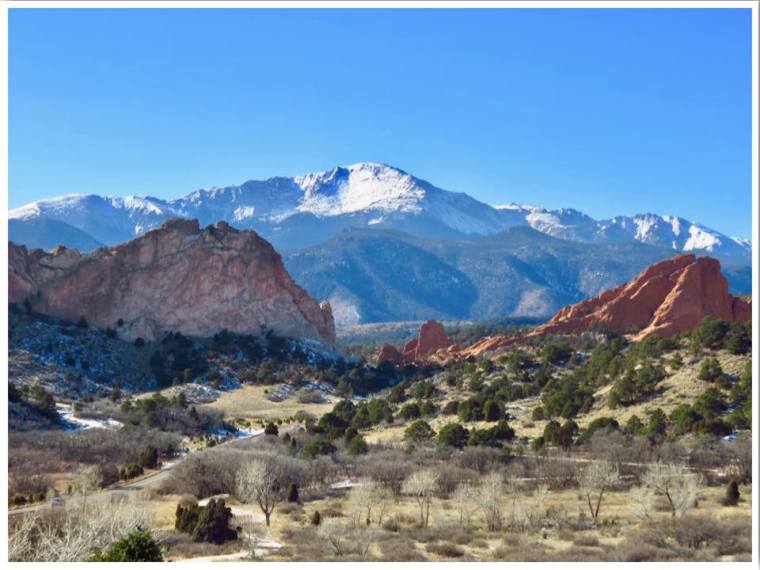 Garden of the Gods is actually located in Colorado Springs, however the south entrance of the park is literally a 2 minute drive from Manitou Springs.  If you were feeling fit and don’t mind walking on roads with no paths, it’s surprisingly close (Balanced Rock being one of the closest formations to Manitou Springs).  The visitor centre however is a bit of a drive away but is a good place to start if you haven’t visited before.  The Garden of the Gods is free to visit and has over 21 miles of hiking trails around various different sandstone rock formations.

The Manitou Cliff Dwellings have been open to the public since 1907.  The Dwellings were originally located in South West Colorado, dating back around 800 years.  In the early 1900’s they were transported to their current location to be preserved.  Visitors are able to walk through the Dwellings and get a small insight to how the Natives would have lived all those years ago.  The cliffs protected the dwellings and the inhabitants from elements.  The museum next to the dwellings has many artefacts from the Anasazi culture (pottery and weapons etc).

In Downtown Manitou Springs is Arcade Amusements, a giant collection of arcade games from retro to modern.  The arcade is spread out across several different buildings (not all are open during the winter season) and the games are packed in.  It can get a bit squishy at busy times.  But some games were only a penny which is an absolute bargain, you can’t get anything for a penny these days…even pressed penny machines end up costing more than a penny!  The newer machines cost more like a dollar to play but many do pay out tickets which can then be cashed in for prizes (the typical chewy sweets, plastic tat).  It’s fun to walk around, I liked seeing the older machines that you don’t see in everyday arcades.

Dotted around Downtown Manitou Springs are 8 natural mineral water springs.  Each spring is said to have a unique taste due to different levels of minerals that end up in the water.  People used to believe that the waters had healing powers due to the mineral content.  The springs are naturally carbonated too.  I took a water bottle around with me that I could fill up when I passed a spring.  I ended up only trying 2 out of the 8, the Cheyenne Spring and the Shoshone Spring.  These both had large round pump buildings so are easy to spot.  I preferred the taste of the Cheyenne Spring (this spring was once upon a time bottled), the Shoshone Spring is very high in mineral content.

Cave of the Winds Mountain Park

The road up to Cave of the Winds is CRAZY, lots of tight switch backs with no road barriers!  The main attraction is an underground cave system, but I was more interested in some of the above ground activities!  Mostly the ‘Terror-Dactyl’, a canyon swing and I LOVE canyon swings!  You are strapped into a seat with a couple of seat belts, tilted forwards towards the ground and then dropped 150ft at 100mph.  It’s brilliant and over far too fast!  There are a couple of other zip lines, a VR theatre, a Via Ferrata climbing route and a high ropes course with a couple of elements that go out over the canyon edge. 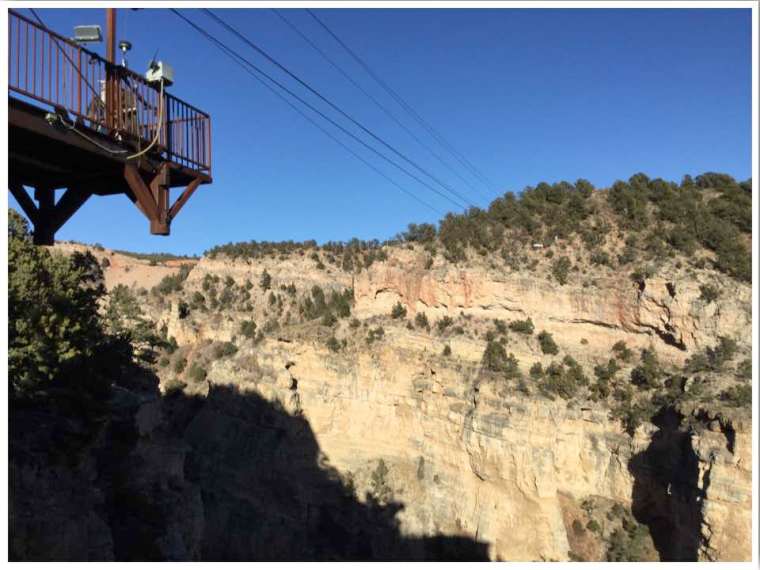 I visited twice, once during the day and then again at night for the Mountain Illumination Festival which is their annual Cave of the Winds Christmas lights celebration.  For $25 a vehicle, each guest is given a voucher for a ‘free’ hot chocolate and S’mores kit, you can enjoy the Christmas lights and also have unlimited access to the high ropes course.  You can’t see the drop over the edge as it’s dark but it still pushes your nerves!

During regular hours, there’s no set entrance fee.  We were able to pay just for the Terror-Dactyl ($40 each) without having to pay for any of the other attractions.

A fun day trip from Manitou Springs is to Royal Gorge Bridge & Park, located around an hour away in Canon City.  The Royal Gorge Bridge is one of the highest suspension bridges in the world (3rd at time of writing), and the highest in the USA.  It’s pretty impressive.  It is made of wooden planks though…some of which are a little bit wobbly and creaky, and there are some big ole gaps between several of the planks so be careful not to drop anything!

We first took the cable car to the other side of the gorge, this gives some great views of the bridge.  We paid extra to ride the Skycoaster (if the zip line had been open we were going to buy the package that included that too), our 2nd canyon swing of the trip! The Skycoaster is slightly different from the one at Cave of the Winds, you lay on your front and get lifted up to the highest point before pulling your own release cord and swinging at 50mph.  At the highest point, you are 1200ft above the canyon floor which is VERY high! 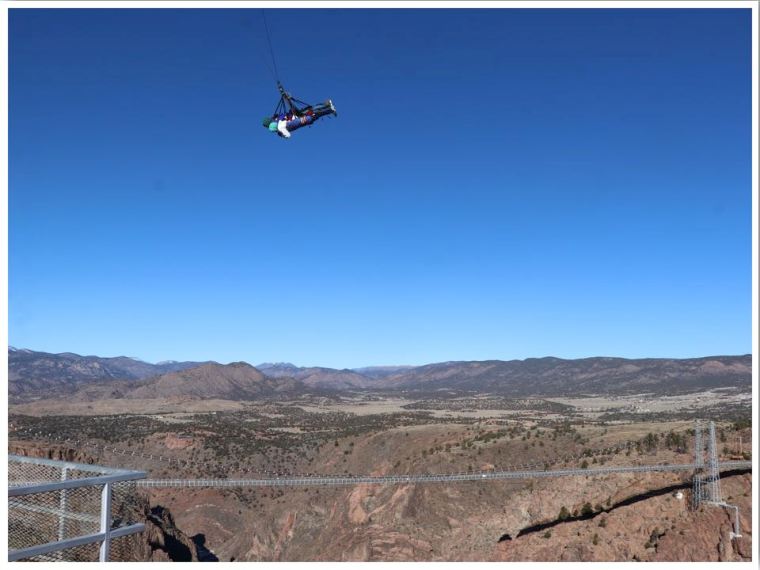 The movie about the history of the park, shown in the Plaza Theatre was very interesting.  Back in 2013 almost the whole of the park was destroyed in a forest fire.  The original cable car was destroyed, as was a funicular railway that travelled down into the bottom of the gorge and yet the bridge remained almost untouched.

I was amazed by the amount of ice cream shops, fudge shops etc in Manitou Springs.  Unfortunately I was so damn cold as I visited in winter, but a a lot of the ice cream shops were in fact still open.

The Border Burger Bar is exactly what it says on the tin, it’s a burger bar with only burgers (or salad) on the main menu.  They have some really unique flavours which have been inspired from flavours around the world, such as: The Korean, The Japanese and The Alaskan.  I like things fairly simple so just had a regular one but with bacon and a fried egg BUT you HAVE to get a side of the fried mushrooms, I don’t know what they fry or batter them in but they are honestly amazing.  The service was awesome too.

Coming from England where curry and Indian Takeaways are very readily available and moving to Iowa where my nearest Indian restaurant is over 90 minutes away, of course I had to go for an Indian when I found there was one in Manitou Springs!  The service was a little on the slow side but it 100% satisfied my craving for a chicken korma and naan bread.  I was so excited for it that I didn’t even take a picture because I just wanted it to get in my belly.

When searching on booking.com, the Villa Motel was the cheapest option for lodging in Manitou Springs during the time we wanted to stay.  Cheaper hotels are available in Colorado Springs but for the location, it was worth paying a little extra for.  We could park our car and then walk into Downtown Manitou Springs.

Villa Motel is a typical motel with external hallways but it does have an alpine lodge look to it.  The room was surprisingly large and even had a heat lamp in the bathroom, which made me feel a little like a lizard in a tank, it was brilliant.  In the morning a light continental breakfast is served in the reception (muffins, bagels, tea, coffee, individual bottles of orange or apple juice) that you can then take back to the room.

There’s a seasonal outdoor pool, however the hot tub stays open year round.  We did brave it one night.  During the winter the floor does get a little slippery around it, especially if you are jumping out and playing with the jets etc.  We half planned on visiting the SunWater Spa for the mountain view hot tubs, but it was right opposite the motel so our hot tub pretty much had the same views as theirs but was free…and without the health benefits…

The Manitou Incline could also be seen from the motel and the free shuttle leaves from the park opposite.  I did struggle walking around Manitou Springs in the cold and at the regular altitude so as much as I’d have liked to have done the Incline myself, I think my lungs might have exploded.

Inspired by these things to do in Manitou Springs? Pin it for later!

2 thoughts on “Fun Things To Do In Manitou Springs, Colorado”