American Football is the most popular sport in the USA…and I don’t understand it.  Not in the sense of how can people like watching football, but more of trying to follow the game play.  I get completely lost!  I was recently invited to Ames, Iowa to watch the Iowa State Cyclones play the Texas Longhorns.  It was my first college football game and even with help from the people around me, I still walked away a little clueless!  So here are some lighthearted observations from a British person trying to understand American Football for the first time!

Disclosure: AD | I received a complimentary ticket to the Iowa State game from the Ames CVB.  As always opinions are 100% my own.

Let’s start with the name.  American FOOTBALL.  In the UK we have football too, but our football in the USA is called soccer which that alone is hard to get my head around!  Football is a BALL that is kicked around with your FOOT, so calling ‘English’ football, football, makes sense.  In American Football, the ball rarely comes into contact with your foot…maybe a couple of times in the game, but we’ll get more into that later.  American Football is more like UK Rugby.

There are different leagues of American Football.  For example, high school, college/university and the NFL (National Football League).  All of these are taken fairly seriously, even high school games can pull in big crowds and yes, all have actual paid ticket sales. 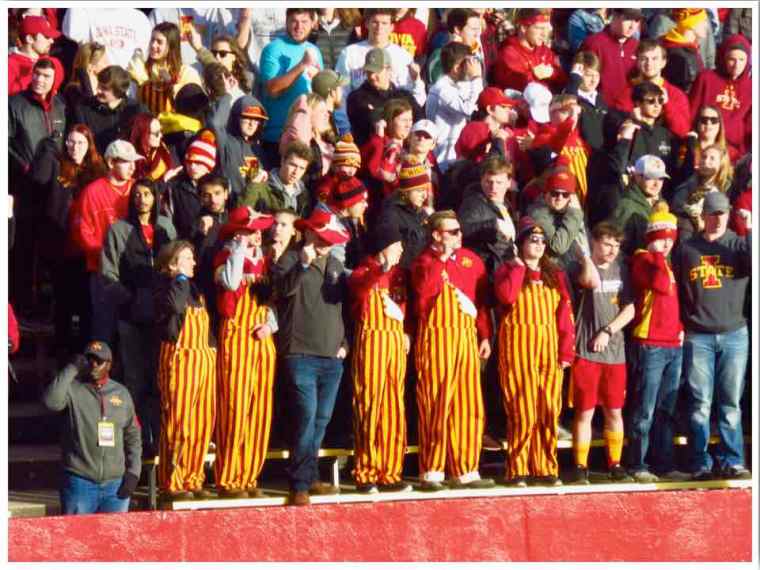 The NFL teams aim to compete in the Super Bowl, which is like the FA (Football/Soccer Association) Cup Final, the winner of that game then wins the season.  It’s a huge affair though, people have viewing parties, there’s a massive half time show/concert with a major band or artist, every company wants an advert slot.

Speaking of adverts, American Football has a lot of breaks which made the game play feel very ‘stop start’.  Unlike ‘UK’ football where they play for 45 SOLID minutes, have a 15 minute break and then play for another 45 minutes, American Football seems to stop for a break every 5 minutes.  In UK football the clock never stops counting down, you may get a few added minutes of injury time at the end of the game (averaging up to around 6 minutes).  But it never stops DURING game play.  There are four, 15 minute quarters but the 15 minutes can actually last for a lot longer than 15 minutes with all the breaks.  The Iowa State game I went to see was being televised so they had to keep stopping for 2 and a half minutes where the TV breaks were going to appear.

In my understanding, American Football is similar to Rugby, but with padding and helmets, so maybe it’s the same, but general game play in itself is very stop start.  Someone will run, get tackled and then the whistle goes, the clock stops and they have to line up and start again.  It lasts about 20 seconds.  This is part of it though and the part I don’t really understand.  They have 4 attempts to get to a certain place on the pitch.  It reminded me a bit of a Gladiators game (a UK TV show) called the Gauntlet, where the competitor had to run the length of the course while the Gladiators were trying to push them off the course with giant foam sticks. 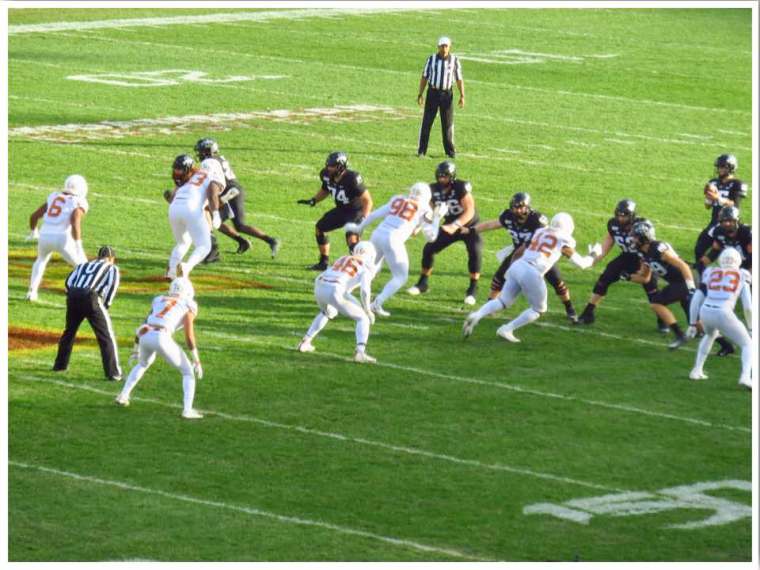 No one is near the guy with the ball…

I found it really hard to keep track of the ball too.  The ball is brown and most of the time the players are ‘hugging’ it, so if they have dark uniforms on it doesn’t really stand out very well against their clothes.  There’s also a lot happening on the pitch at once, in ‘soccer’ it’s a pretty fluid game, the players are moving with the ball or at least in the same direction.  With American Football regardless of who has the ball, everyone in the line up is ‘attacking’ someone else whether they are close to the ball or not.  If you blink and miss a pass, it’s then hard to see what ‘scrap’ the ball is hidden in.

The team also seems to be massive.  There are only 11 players from each team on the pitch at once but then it seems like the players operated on a rotation and a whole bunch would leave the field and more would come on.  In soccer you only tend to get 3 substitutes during the whole match and once they are on, they are on, there’s no more changes.

The people I was watching with (all very nice and patient with me!), would ask me for my opinion throughout the game and I was like ‘I just want someone to have the ball and run the full length of the pitch and get a goal or something as it’d be more exciting than keep stopping’.  This did in fact happen ONCE and I was like YES! RUN RUN RUN! 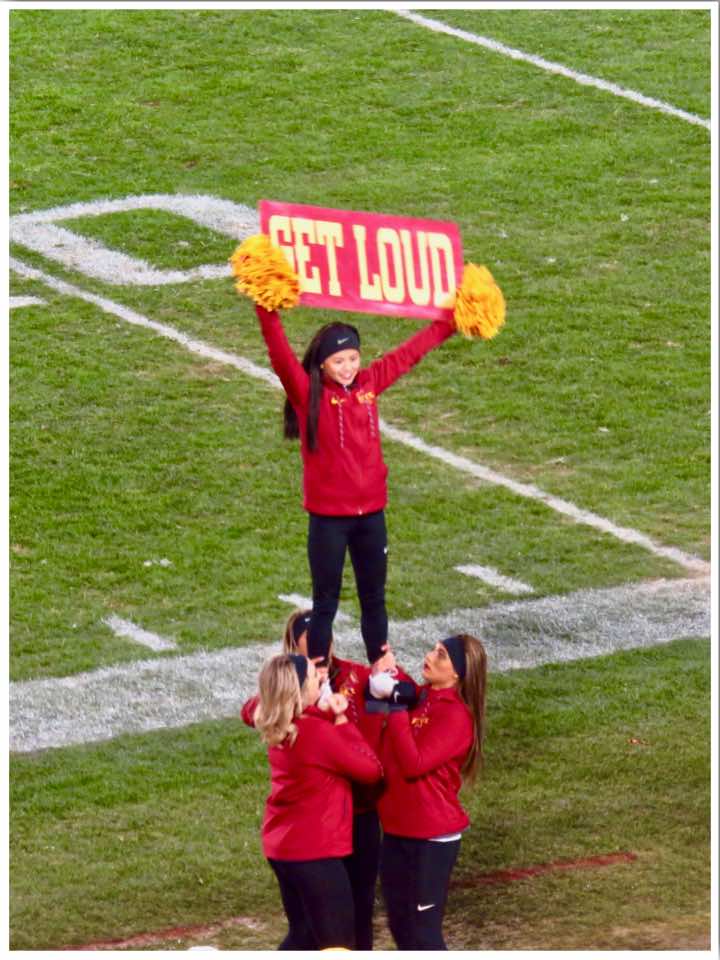 Which then leads me to scoring.  Scoring can be done in 2 ways.  Crossing the ‘back’ line or ending up in some sort of end zone which is a Touchdown or at some points they get the opportunity to try and kick the ball through the goal stick things, called a Field Goal.  I missed just having a simple goal where if it goes in the net, that’s a point!  Nice and simple to keep track of!  Kicking the ball through the sticks is worth LESS than if you get it in the end zone.  I struggled to understand the 4 chances to get it in the end zone thing.  At the end of the 4 attempts, sometimes people had the chance to kick the ball at the sticks and other times it was just booted down the pitch in the opposite direction, which again I didn’t really understand the reason for this…or maybe I was just distracted and missed some of the stuff that was actually going on! 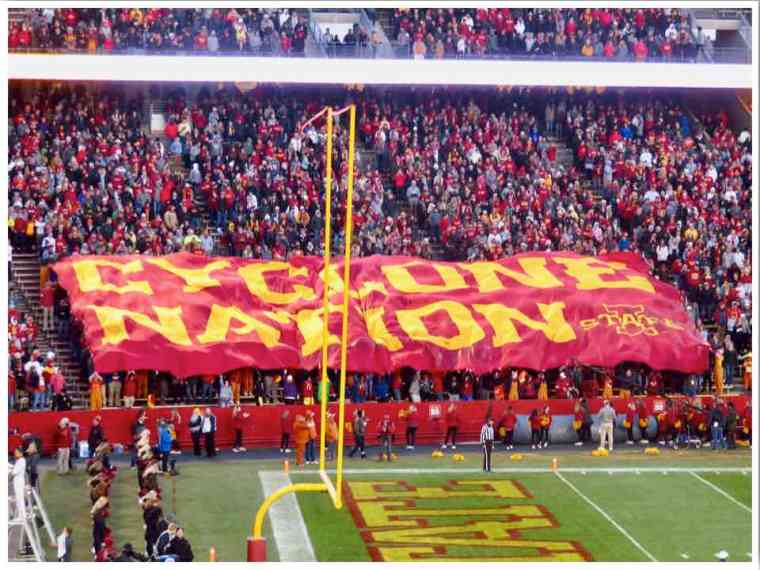 The home team won which is always fun to experience.  With 4 seconds left it was a draw and Iowa State had one chance to kick the ball through the posts and take the lead, which they did!  I know the people around me were on edge but I kinda liked the excitement (although I don’t like it when it’s England playing in situations like that, so I know how they were feeling)!

I do kinda like the whole ‘show’ of American Football.  It’s not just the team that are physically playing the game, but there are cheerleaders and mascots working the crowds (I’ve never seen cheerleading in UK football).  During the half time break, as mentioned there’s a band play in the Super Bowl final (previous artists include: Coldplay, Maroon 5, Beyonce, Lady Gaga) or the marching band will perform…in soccer you get sod all, it’s just a chance to go to the toilet without missing anything! 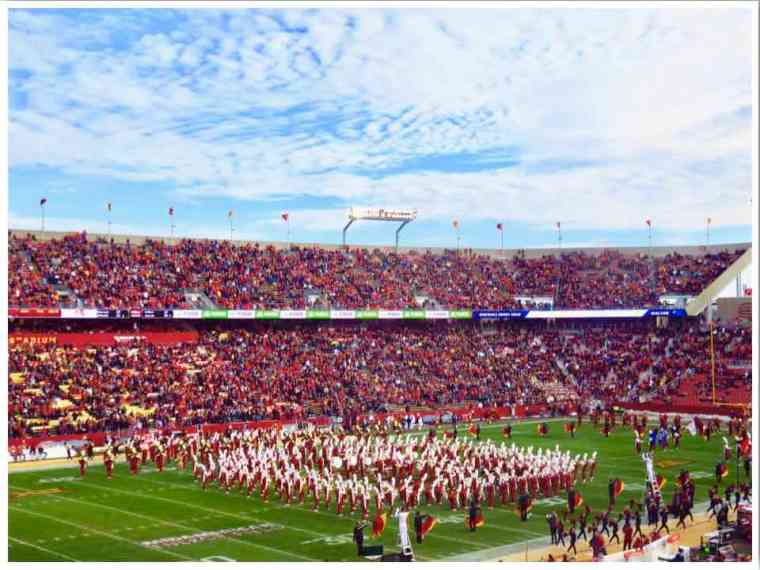 American sports seem to like crowd cameras which are a bit embarrassing really (baseball is the same).  They scan the crowd and then make people do cringey things on the big screen and 90% people do actually do it if it lands on them.

There’s also a huge focus on the military, where during the breaks they’ll thank various members of the military that are in the audience, donations will be given etc.

The National Anthem is huge in America, it’s sung as every given opportunity.  In the UK/football it’s only really sung during international matches against a different country, each country will sing their national anthem before the game starts.

I’m sure a lot of people would have seen the whole standing vs kneeling during the national anthem.  In the UK the anthem is more of a song of national identity rather than respecting the military, stand or sit, it doesn’t matter what you do. 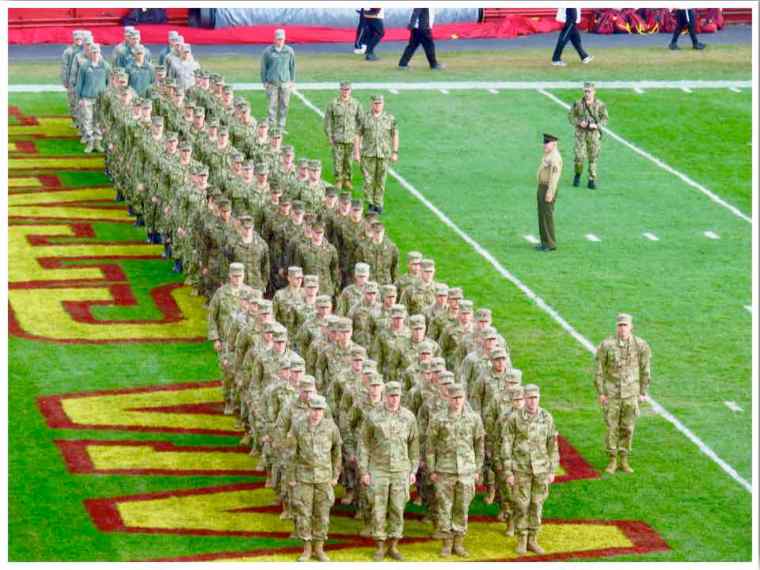 The thing I love the most about the English national anthem at a football/soccer game?  The whole crowd belts it out at the top of their lungs (even if watching it in a pub), like I said, it’s a sense of national pride (check it out in this YouTube video, GOOSEBUMPS ahhh LOVE IT!).  In the USA the anthem is only really sung by an individual with a microphone or in the case of the American Football game I went to, the marching band plays it.  No one really sings along, they just stand in silence. 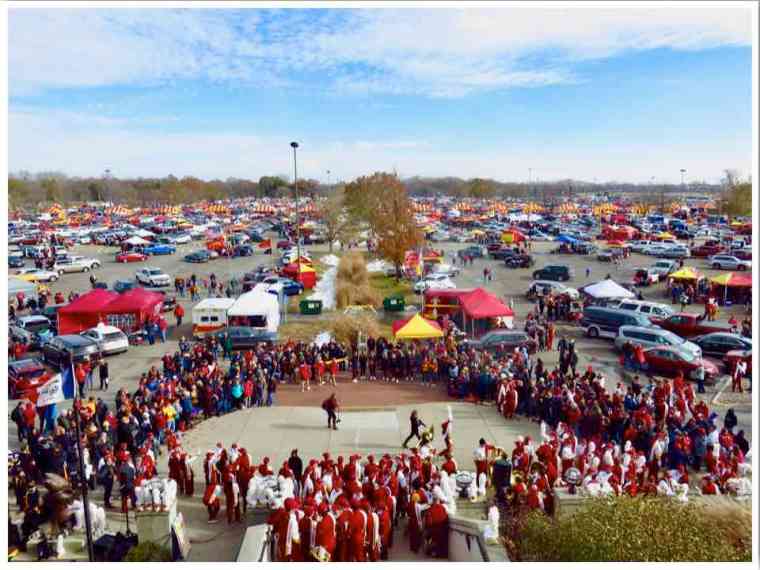 Before the game, people ‘tailgate’, well I guess they may drive close to each other’s bumpers if there’s traffic, but in the US tailgating is basically a big party in the car park where people hang out before the game.  They play games, such as cornhole (throwing bean bags at a board with a hole in it), throw footballs to each other etc.  People take grills and cook burgers and hot dogs, listen to music, chat etc.

As the Football season runs September to December/January, I personally think they are crazy (or maybe dedicated is a better word), because in Iowa, especially when it gets into winter, the weather is damn cold and quite frankly I’d be miserable.  (Thanks to the Ames CVB I got to watch the game from their heated suite so I didn’t even have to sit out in the cold with everyone else!) 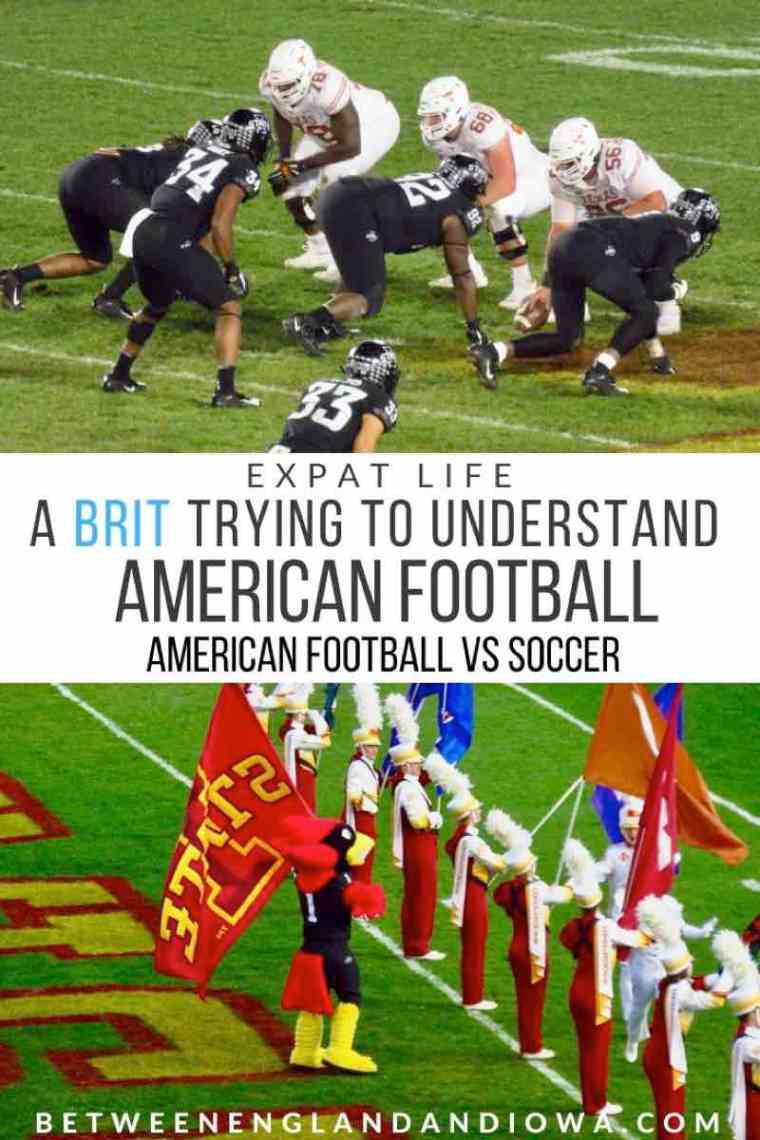 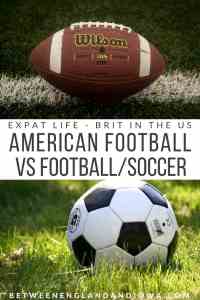 8 thoughts on “A Brit Trying To Understand American Football: Soccer vs Football”