I’ve had a bit of a soft spot for sea turtles for a while now.  One of my first solo trips was to Costa Rica where I joined a sea turtle conservation project and I have since been fortunate enough to swim alongside these animals in Australia, the Maldives and Belize.  During my trip to the Florida Keys, I knew I had to pay a visit to the Turtle Hospital in Marathon and check out the amazing work that they are doing for these creatures.

Disclosure: My visit to The Turtle Hospital was hosted, however all opinions are 100% my own.

First things first.  Their tagline is “Rescue, Rehabilitation, Release”, they are not a zoo and nor do they act like one.  They are very much a rehabilitation centre and a working hospital, that offer tours in order to educate people about sea turtles.  The Turtle Hospital was the first hospital of its kind in the world!

The Hospital first started life as the Hidden Harbor Motel.  Richie Moretti purchased the motel back in 1981.  In the early days, he used the tidal salt water swimming pool as a way of educating local school children about marine life and fish.  Although thanks to a popular TV show during the 80s, ‘Teenage Mutant Ninja Turtles’ (yep I was a fan of that too!) kids began asking where the turtles were and if they could see turtles.  This started the wheels turning and in 1986 after receiving the correct permits, the first sea turtle patient arrived at the centre!

Since it opened, The Turtle Hospital has released more than 2000 turtles back into the wild!  Although try as they might, unfortunately not all the turtles that arrive at the hospital can be released back into the ocean.  For example, one of the main injuries that makes a sea turtle unreleasable is ‘bubble butt syndrome’ (yep, real name!).  This occurs if they get hit by a boat and are then unable to release gas, causing it to float to the surface. 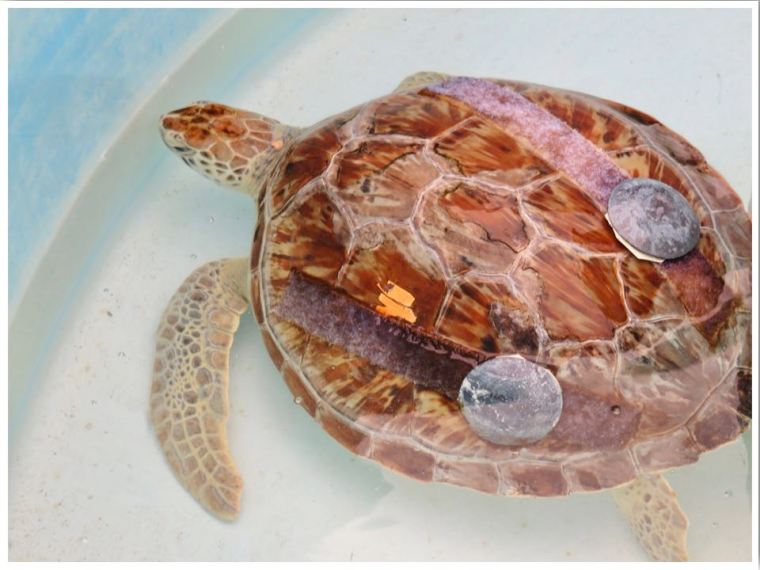 Releasing it back into the wild in this condition would make it a target for repeat boat strikes.  However in captivity they are able to continue living a happy life with this syndrome.  It can be controlled by adding temporary weights to their shell to help them to sink/swim easier.  (Dot at the National River Museum in Dubuque Iowa is an example of this!) 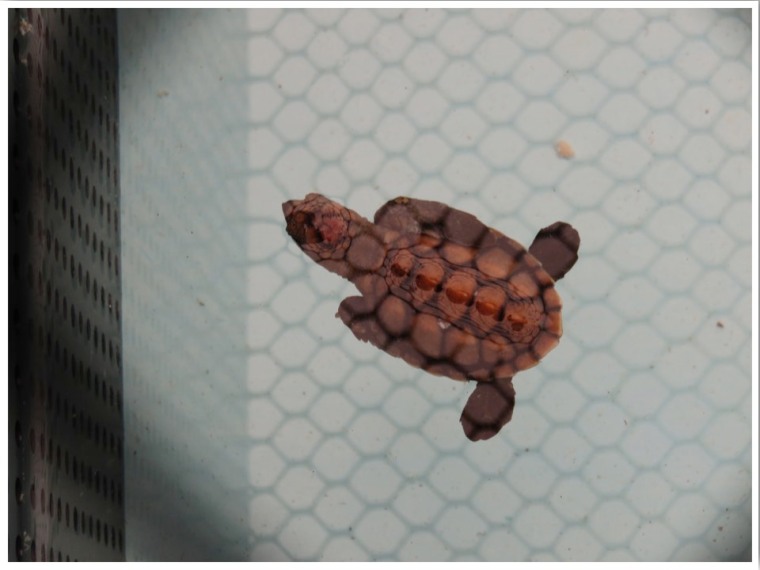 During my visit in December, there were 38 turtles at the hospital, representing 3 out of the 5 species that are commonly found around the Florida Keys.  5 were permanent residents and 17 were non-releasable.  A week later, another 32 (!!!) turtles arrived at the hospital after being washed up on the New England shores after not migrating south quick enough.  Their bodies had begun shutting down due to the cold water temperatures!

I can guarantee that you can’t visit The Turtle Hospital in Marathon without being moved.  The educational tour lasts around 90 minutes.

It begins with an introductory talk about The Turtle Hospital, the different types of sea turtle species and their biggest threats in the waters surrounding the Florida Keys.  It is honestly shocking to see the amount of rubbish/waste that the turtles eat.  They can ‘pass’ the majority of what they eat, but the problem being that when they eat things like plastic bags (which look like jelly fish in the water), it makes them feel full up so then eat nothing else, but obviously they aren’t getting any of the actual nutritional benefits that real food would give them!

A way that the Florida Keys have tried to help with plastic waste that could potentially end up in the sea, is by switching to paper straws.  Especially in Key West I found that a lot of bars and restaurants were only serving paper straws in drinks.  It may only be a small change but at least it’s a step in the right direction.

When I visited, there was a turtle that was on the operating table, recovering from a recent surgery to remove Fibropapilloma tumours.  This is a common problem for Green Turtles in the Florida Keys, as well as around the world.

The majority of the tumours are found externally but can occur around the eyes, mouth and flippers, making it hard for the turtle to see, eat and swim.  Research is still being carried out as to what causes these tumours on turtles, it is thought that things like changing water temperatures could potentially be a problem.

The main part of The Turtle Hospital is still located at the back of the property around the old motel salt water swimming pool.  This is where the majority of the turtles live, altogether in the same pool, complete with little fish (and even an eel!) that keep getting in!  Visitors can even throw a handful of turtle food into the pool during this time.

Around the large pool area are smaller individual tanks.  These are for the turtles that are in the rehabilitation stage of recovery.  Every tank can be adapted to the turtle’s individual needs.  If the turtle needs to rest, the tank will be less empty so they can sit at the bottom and not have to do much to reach the surface to breathe.  If the turtle needs to get its strength back, the tank will be filled and a current can even be switched on to encourage it to swim!

One poor turtle called ‘Shelmore’ had been through the wars, it had somehow swallowed a 2ft eel (turtles don’t usually eat eels) which had then eaten through the turtle’s small intestine and ended up in its body cavity!  While researching for this post, I’ve since discovered that at the end of December, Shelmore was released back into the wild, having made a full recovery!  Yay!

The turtle release days are often announced a day or so in advance, allowing the public to witness the event too!  For example, Shelmore’s release was announced the day before with the time (8am) and the location.  He was released in Islamorada, one of the Keys a little further north, as this was where he was originally found. 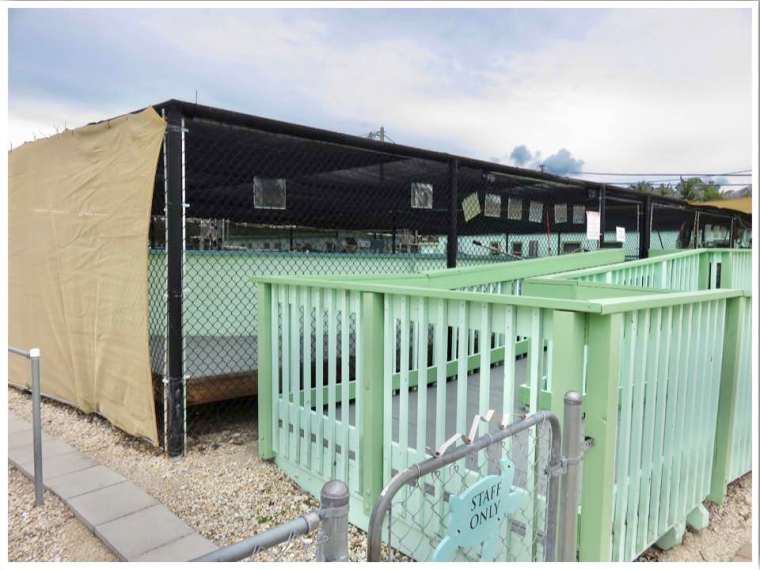 Being located in the Florida Keys, The Turtle Hospital is also prepared for hurricanes.  On site the hospital has two 30,000 gallon above ground tanks, that are designed to withstand a category 5 hurricane.  Putting the size of these tanks into perspective, the main in-ground salt water pool holds 100,000 gallons.  When hurricane Irma hit in 2017, it was a category 4 and all the turtles at the hospital remained completely fine and safe.

The tour finishes up back in the gift shop area.  It’s well worth hanging around in this area and reading the displays.  The Turtle Hospital is a non profit charity.  All sales made in the gift shop, turtle adoptions and the tour admission fees go straight back into the up-keep of the facility.

The educational tours run on the hour between 9am and 4pm, 7 days a week.

The Turtle Hospital is unable to have staff out patrolling the waters for injured turtles.  There’s a 24hr hotline for people (boat drivers, divers, snorkelers etc) that spot sick or injured turtles while out at sea in the Florida Keys area (305)481-7669.  Some tell tale signs include: floating on the surface/unable to dive, tumours on its face/flippers, trapped in fishing lines etc.

Thanks again to The Turtle Hospital and The Florida Keys & Key West for having me!

Inspired? Pin It For Later! 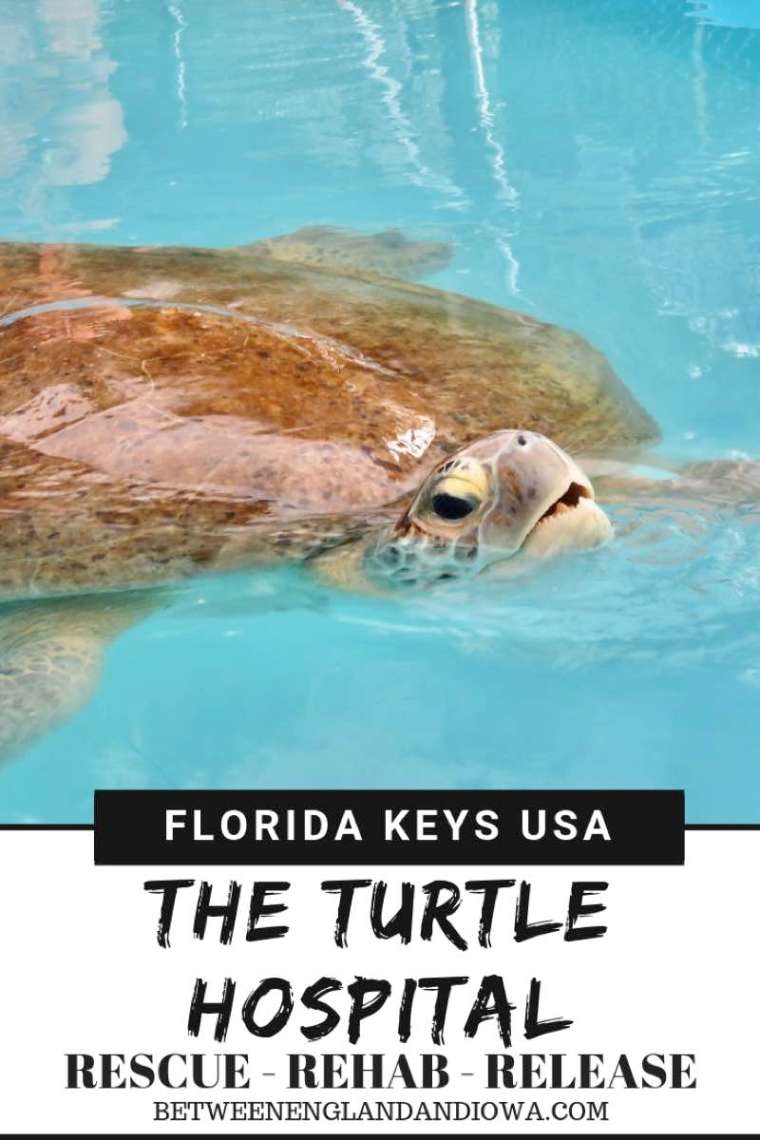 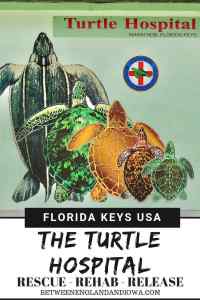