For those that may remember, last year I wrote a 30 before 30 bucket list, 30 things that I had to do in my 29th year.  One thing that I had wanted to complete was an Operation Christmas Child shoebox gift.  Years and years ago when I was a kid, me, my mum and sister had put one together and when I discovered that they also do it in the USA too, I thought it’d be nice to do something for someone else!

The Operation Christmas Child program was started in 1990 in the UK (whoop whoop!), in Wales to be exact.  The idea being that you fill a shoebox full of gifts, school supplies, clothing and hygiene products, which then get delivered to a child in a country that has maybe suffered from a natural disaster, been affected by war, suffers from poverty etc.  A few years after the project was established, they joined forces with Samaritan’s Purse and have since delivered gifts to over 100 countries around the world.

Even as an adult, I absolutely love receiving my care packages from home (or I end up spending a fortune on imported British items that aren’t readily available here).  It’s always exciting to open them up and see what’s inside and Operation Christmas Child is essentially the same thing!  Hopefully it’ll put a smile on a child’s face and make them feel special!

While I was at college, we took part in fundraising activities to raise money for kids in Kenya.  I jumped out of a plane and with my sponsorship money, we bought LOADS of school supplies and personally hand delivered them to a couple of schools.  (I had 900 pencils in my suitcase…).

I’ve always been a little skeptical about how much of fundraising efforts actually reach the people in need so it was nice to know and see the joy on the kids faces when we gave them the school supplies.  We sat and spoke to them about life and the boys even took part in a football match and it was a great experience.

I can only hope that even if Operation Christmas Child is affected by adult politics and what not, that at the end of the day,  the child experiences happiness from the end product.

I also LOVE the way that their logo is a shoebox that looks like an airplane!

What To Pack In An Operation Christmas Child Shoebox

You can get a pre printed shoebox online or simply use an old shoebox.  I covered mine with wrapping paper to make it look a little nicer. If you choose to wrap your shoebox, make sure you wrap it in a way that the box can still be opened, so don’t seal it up.

Next you pick a gender.  Girl or Boy.

I chose a girl and I was aiming for 10 – 14 year olds but I since decided that I think my box is more suited to a 5 – 9 year old!  I had so much fun filling up my box and as I was wandering around I couldn’t help but get excited thinking about the little girl that’d be opening up my gift!

I spent around $25 on my box and tried to include a range of different items!

Operation Christmas Child recommend including one ‘wow’ item.  Something a little larger.  I packed a toy cuddly monkey!  I wanted to put my personality into the box.  Those that know me well will know that I have a monkey that I’ve had for almost 30 years.  It may be sad but when I moved to America my monkey is like my little piece of home…even 30 year olds need a bit of home comforts sometimes!  Part of me hopes that the child that receives the monkey will love it as much as I love mine!

I included various other toys…mainly creative things as it’s something that I’ve always loved!  Everything in this section was $1 or less:

A velvet art picture which came with a little pack of feltpens.

I’m aware that the feltpens may run out quickly, but hopefully they’ll last long enough to finish the picture.  Operation Christmas Child say you should think about the practicality of the items you pack.  For example, if you pack pencils, it’s an idea to then include a pencil sharpener too.  That’s partly why I packed crayons, yes they break but they are easier to deal with and hopefully last longer than felt pens!

It seemed silly to spend $1 on 1 Colgate toothbrush when I could get a pack of 6 for the same price!  Maybe they’ll be split between a family or simply just last a while.  I thought the lip balms were cute.  It’s one thing that I do use a lot of, I hate when I get dry/sore lips and I know how obsessed the 5yr olds get in my class when it comes to lip balm! 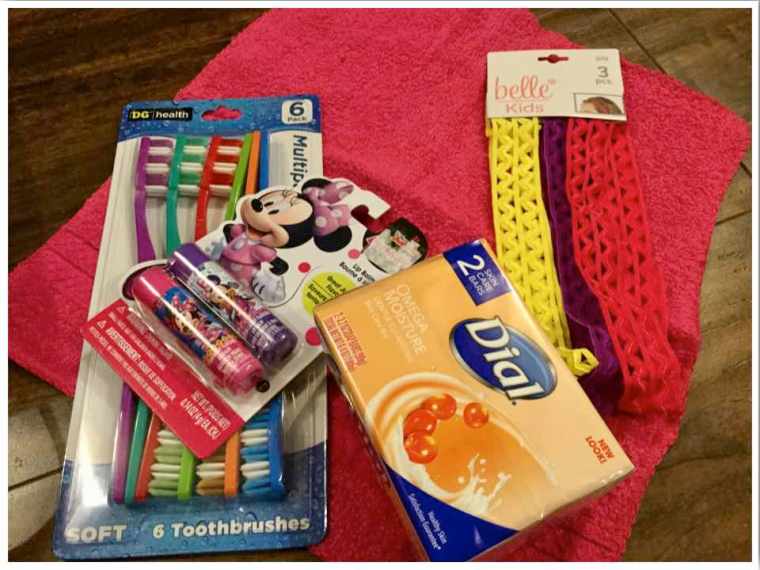 I found it hard to pick out clothing…a 5 year age gap is pretty big so I tried to aim for things that would fit any age in the group or could be an item that could be grown in to:

The site suggested things like hair clips and bows but then I thought about what the girl may look like…she could have long hair, short hair, maybe no hair, so headbands seemed the most practical option.  Even if they don’t wear them on their head, they could be worn as a necklace or bracelets or even catapulted across the room!

I read a post by someone saying it was stupid to suggest that hats and gloves should be sent, as some countries never get cold winters etc.  But then you have to think about acclimatization.  We had family friends that used to live on the Spanish island of Tenerife.  They would get cold when temperatures would hit 20c because when you’ve been used to 30c, the drop to 20c suddenly feels freezing.  To us in England, 20c is pretty warm!

A prime example is when I visited Morocco and camped in the Sahara Desert.  The day time temperatures were well in the 30s (celsius) but during the night it got down to 0c and I wore ALL of my clothes.  Altitudes are often colder, nights can be cold and at the end of the day, my box may end up in a country that does indeed get cold.

They also suggest putting a personal note and a photo in the box.  Now I don’t want to seem like I’m the super hero and swooped in to save the day, but I thought it would be nice for the little girl to see what I look like and know that I was thinking about her when I put the shoebox together! 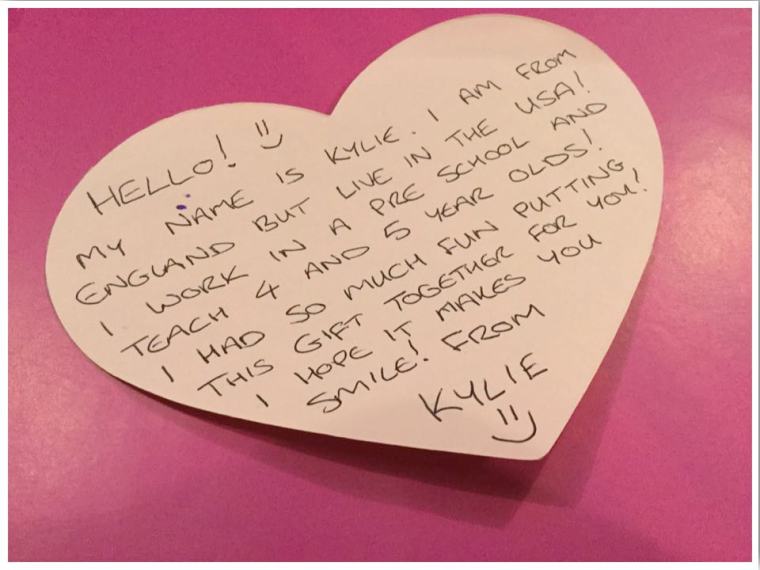 Things You Can’t Put In An Operation Christmas Child Shoebox

Frequent flyers will know all about flying with liquids and what not.  Therefore Operation Christmas Child do say no liquids or aerosols are allowed in case they leak/explode.  Things like lip balm and lipsticks are OK, as are wet wipes, but toothpastes are a no go.  For this reason I did consider not packing toothbrushes but speaking from experience, sometimes just a wet toothbrush is better than nothing!

No food/sweets are allowed to be packed in the shoeboxes.  This is down to food import rules/customs, allergies and that the food could potentially be mush by the time it arrives.  (I know from experience the disappointment of receiving melted chocolate!)

War toys are not allowed either, so items such as toy guns or army men etc.

Once the shoebox is all packed up (leave it unsealed as they have to do checks on the items and and will then stick it up, I feel sorry for the person that has to repack it, I hope they are good at Tetris!), you go online and print off a label for free.  This will basically tell Operation Christmas Child who your box is for.  You’ll either print off the boy label or the girl one and then tick the age catagory. 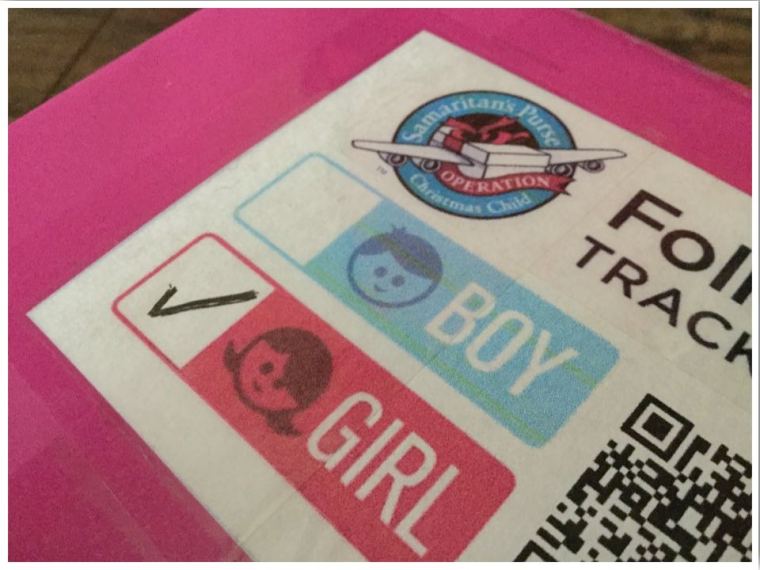 You can now pay $9 to track where the box is shipped to!  The traveller in me obviously can’t resist knowing where my shoebox is going to end up.  This is a different label that has a barcode on with a tracking number which you can enter in on their website to see where the box is.  The link apparently goes ‘live’ around mid-December, I’ll keep this post updated with the location of my shoebox as soon as I find out!

Unfortuntely they can’t guarantee that the shoebox will arrive before Christmas due to customs and the quality of roads and travel in some of the locations.  They could take anything up to around spring to arrive.

When your box is all ready to go, you just take it to one of the drop-off locations.  For the most part, the drop-off locations in the USA are churches, as Operation Christmas Child does have a bit of a religous connection.  I did used to go to church as a kid, which is how I first came across Operation Christmas Child.  However, I haven’t actually been to church properly (aside from weddings etc) or considered myself religous for almost 20 years…(maybe I got ‘lost’ who knows, I have always had good morals though).

In the UK, most of the drop-off locations are actually at the Shoe Zone shoe shop chain!

The drop-off time isn’t actually that long and if you’re not on top of things, you’ll miss it (like I did last year)…it’s also at the beginning of November to try and get as many boxes to arrive before Christmas, so it does mean you have to start thinking about Christmas early if you want to fill a shoebox!

(Me with my shoebox in front of all the FULL up boxes ready to be sent to the distribution centre!)

When I dropped my shoebox off, I signed a log and the volunteers put a couple of elastic bands around my box to hold it shut.

The drop-off location in Dubuque had so far received over 1000 (!!) shoeboxes and they were still accepting donations for almost 3 more days when I took mine in! 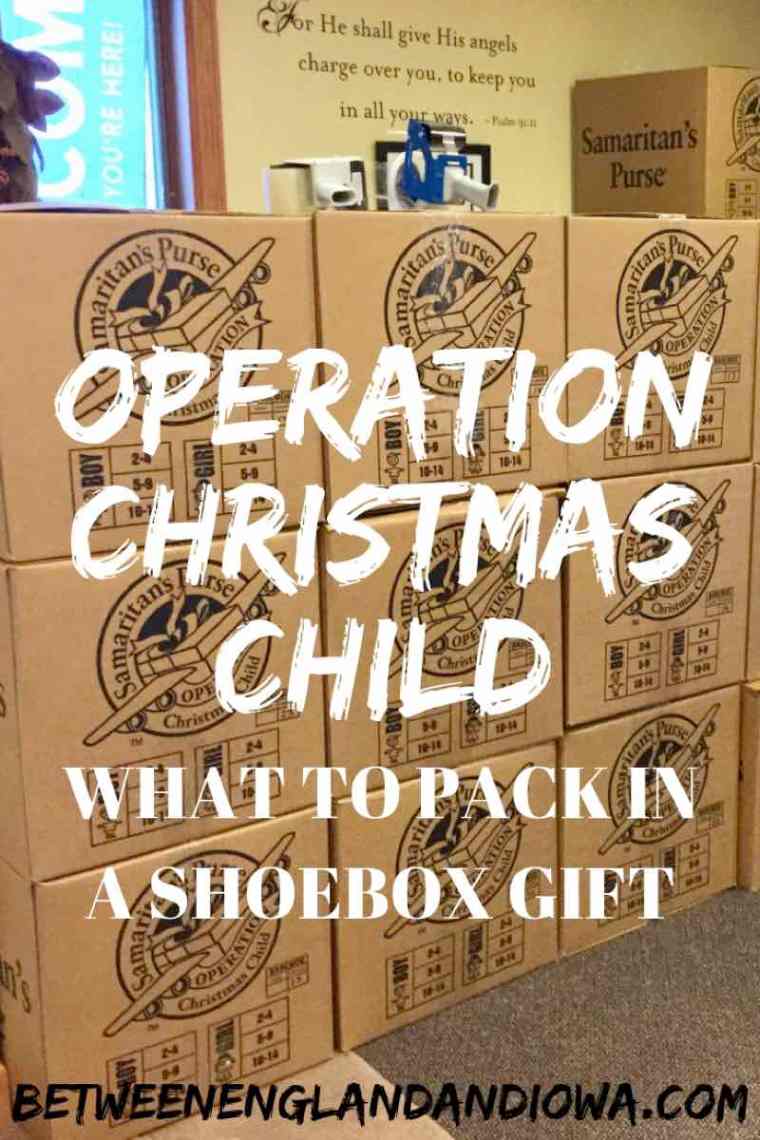