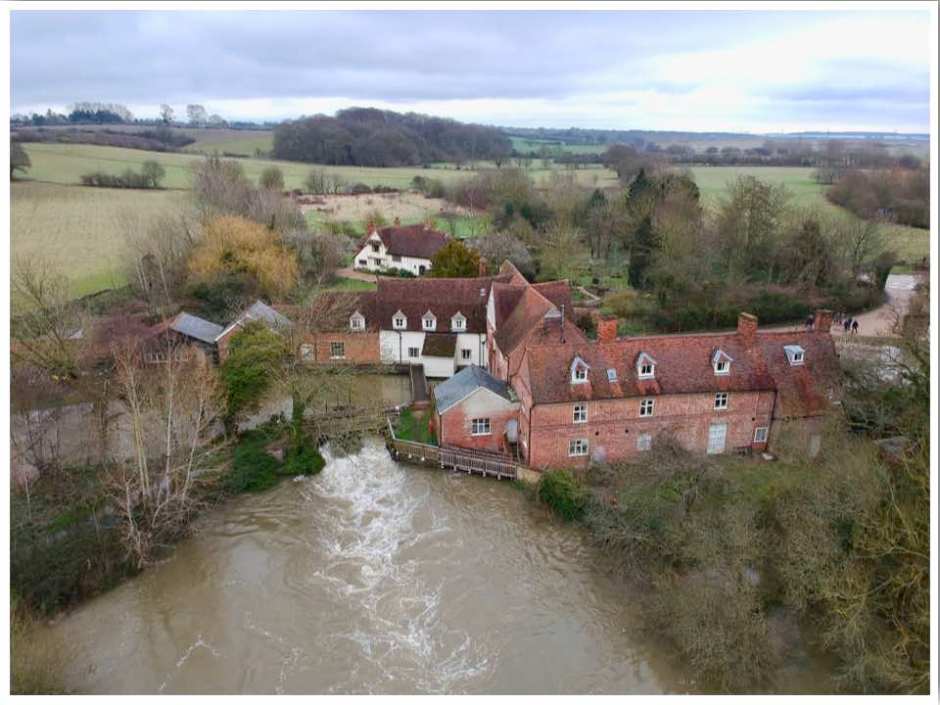 Even on a typical gloomy English bank holiday, Flatford Mill in Suffolk still has a charm about it.  This little corner of England is know as ‘Constable Country’ after the famous painter, John Constable found inspiration in the area for some of his artwork, after his parents bought Flatford Mill back in the 1700s.  But there are records of a mill being at Flatford written in the Domesday book which dates back nearly 1000 years ago!  (William The Conquerer ‘surveyed’ the whole of England and Wales in 1087 to determine land taxes across the country and the findings were recorded in the Domesday Book).

Flatford Mill and the surrounding area are now owned by the National Trust organisation.  They first acquired the Mill in 1945 and have since expanded to cover more buildings and areas of the countryside over the years.  The National Trust aims to protect and preserve nature and British heritage sites through conservation efforts. 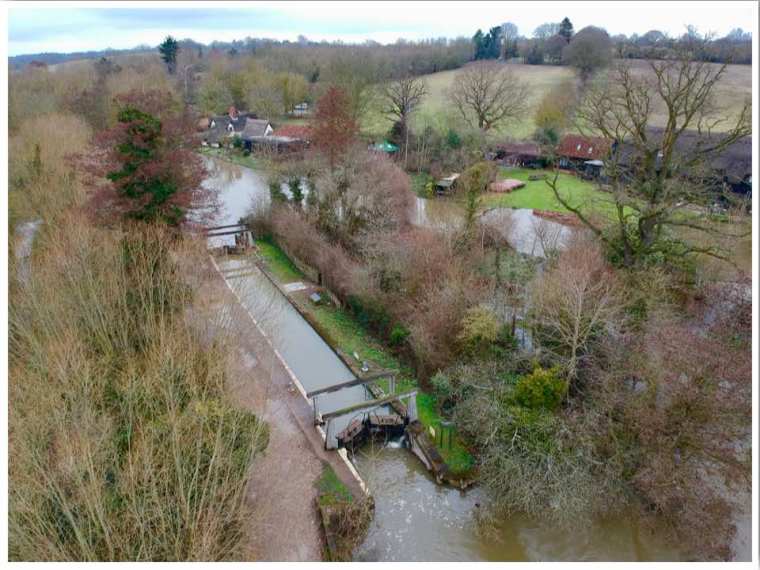 Things to do at Flatford Mill

First things first, the buildings surrounding Flatford Mill are only open to the public on rare occasions so it’s not a typical guided tour attraction, it’s very much focused on the Constable connection and the nature side of the area. It’s very family (and pet) friendly, making it a great option if exploring ideas for days out in Suffolk!

I remember learning about John Constable at school but can now appreciate it more as an adult.  There is a small ‘Constable Exhibition’ showing replicas of his artwork, the originals being in some of the major London galleries, such as the Tate Britain and National Gallery.  It’s worth picking up a map as it lists some of the viewpoints for the paintings. 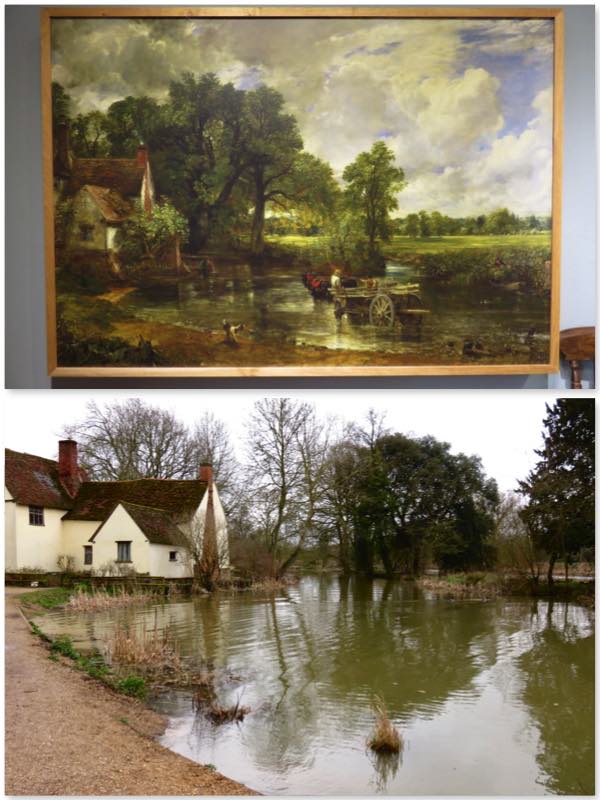 One of his most famous paintings is ‘The Hay Wain’ (above) which shows part of Willy Lott’s House and the River Stour…at first we were a bit like “are we sure we’re in the right place?!”, but then you have to remember that the picture was painted back in 1821…nearly 200 years ago…so of course it’s going to look a little different (more trees and the water was higher)!  They also offer guided walks to these viewpoints.

I felt like Willy Lott’s House was kind of the star attraction because of the painting (lots of people photographing it) but make sure you turn around and take a look at the actual Flatford Mill building!  It’s more architecturally pleasing with the brickwork, arched windows and vines climbing up the building.  On the other side of the road is Valley Farm, a house dating back to 1400! 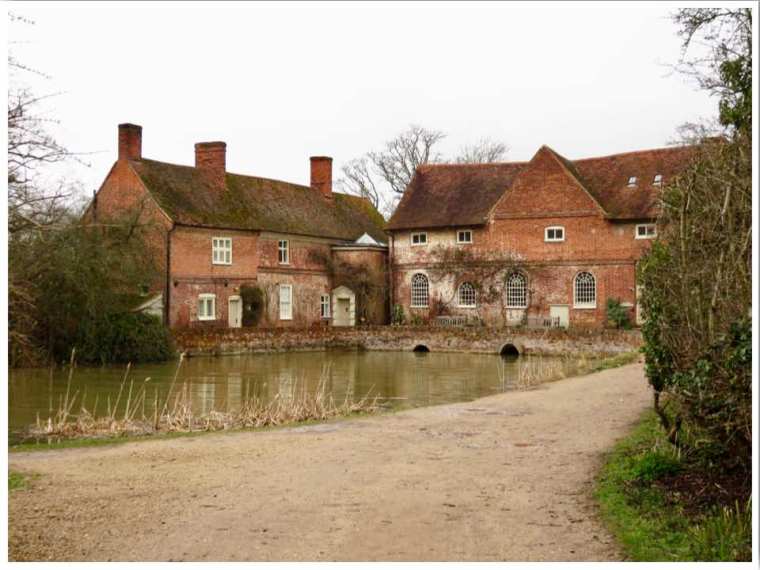 The only building that is open to look around inside is Bridge Cottage.  This was once a toll collection point for the Flatford Lock.  The cottage is currently set up to replicate how it would have looked back in the 1880’s.  It’s crazy to think that at one point there were 2 families living in this small space!

There is a small tea room and gift shop next to bridge cottage including a tiny little ‘book nook’, a place where you can donate old books or buy a second hand one for a suggested donation of £1 (an honesty box hangs on the door).  All donations are put back towards conserving the Flatford area. 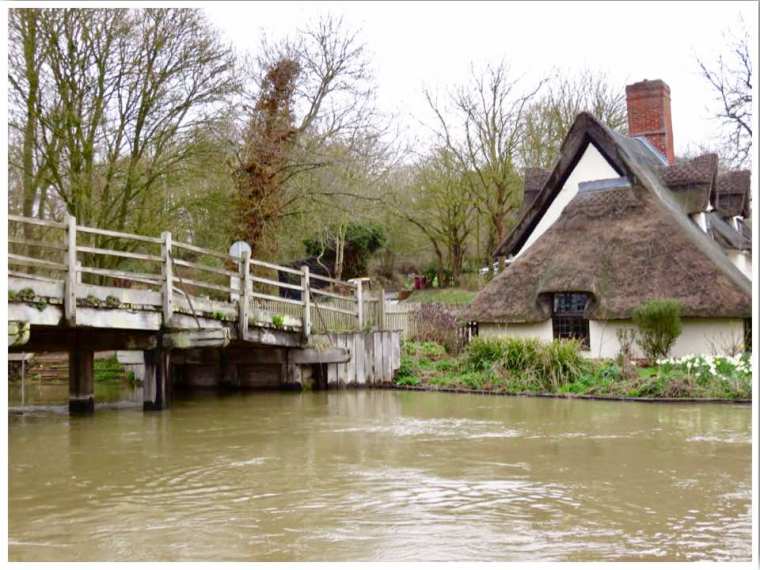 Flatford is also home to an RSPB (Royal Society for the Protection of Birds) Wildlife Garden.  Its aim is to teach people how to make their gardens more friendly for wildlife, for example, making a 9cm ‘hedgehog hole’ in your garden fence that allows hedgehogs to move easily between gardens to be able to find more food.  The staff at the Wildlife Garden are very friendly and are happy to answer any questions!  (They were impressed with mine and my sister’s efforts at crawling through a weaved tunnel of sticks in the garden…a route that a couple of local ducks have used to get back to the river!)

I wish I had visited Flatford when it was warmer!  During the summer you can hire row boats or even take a little 8 seater ‘shuttle boat’ along the River Stour to Dedham village!  Otherwise there is a 3 mile walk across the fields to the village, however due to the recent downpours, the area was flooded and the staff were advising people not to attempt the walk (Easter 2018).

There are a couple of shorter walking routes: the Orange Route which is around 3/4 mile and takes around 30 minutes to complete (or a lot longer in the mud) and a Purple Route which is a little longer at 1.25 miles equalling a 45 minute walk. 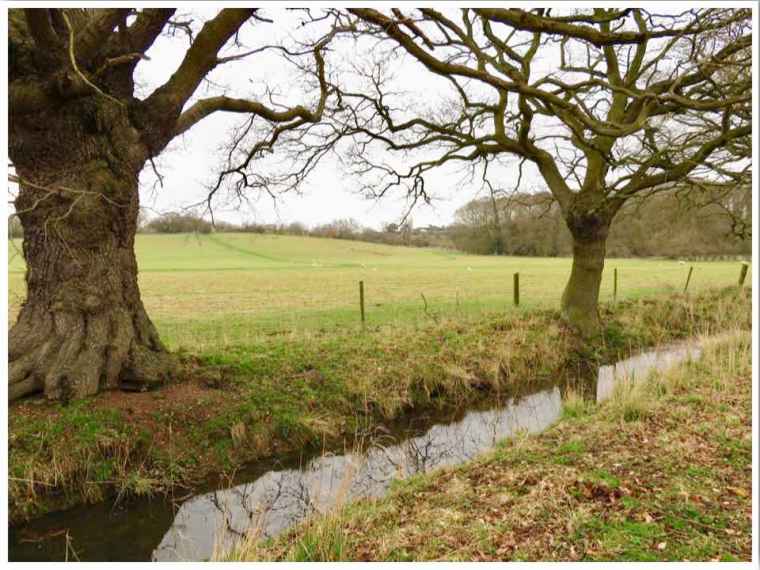 Flatford is home to special events that take place through the year, from ranger and nature walks to Cadbury Easter Egg hunts.  As 4 grown ups, we took part in the egg hunt and it was actually pretty tricky, there were 12 signs dotted around the Orange Route with multiple choice options for various animals and their babies.  Now I know what you’re thinking…cow – calf, sheep – lamb, duck – duckling…think again!!!  More like what is a dragonfly’s baby called or a bat’s baby (thanks Siri)!  If you genuinely know what a dragonfly’s baby is called WITHOUT cheating, let me know in the comments because you are cleverer than us!

The website also lists some cute ideas for things to do at Flatford, such as: play pooh sticks, roll down a hill, play a grass trumpet…I’m glad some of the things I used to do when I was a kid are still being encouraged!  There are also geocaches in the Flatford area!  I would suggest downloading the app to find these as they use GPS coordinates.  Geocaching is a really fun, and sometimes frustrating, challenge!

Flatford Mill on a Rainy Day

“We love a wet day – Over 43 per cent of rainwater in England and Wales drains through National Trust places and spaces.”

On the National Trust Flatford website, ‘run around in the rain’ is listed as one of the things to do!

I didn’t visit in the rain BUT because of the recent rain it was extremely muddy.  The orange and purple routes are mainly through fields or along muddy tracks so I would advise taking welly boots…we weren’t prepared (and my wellies were 4000 miles away in America and wouldn’t have fit in my hand luggage) and ended up trying to walk through the bushes to avoid the worst of it!  There also isn’t much indoor space to escape any showers. 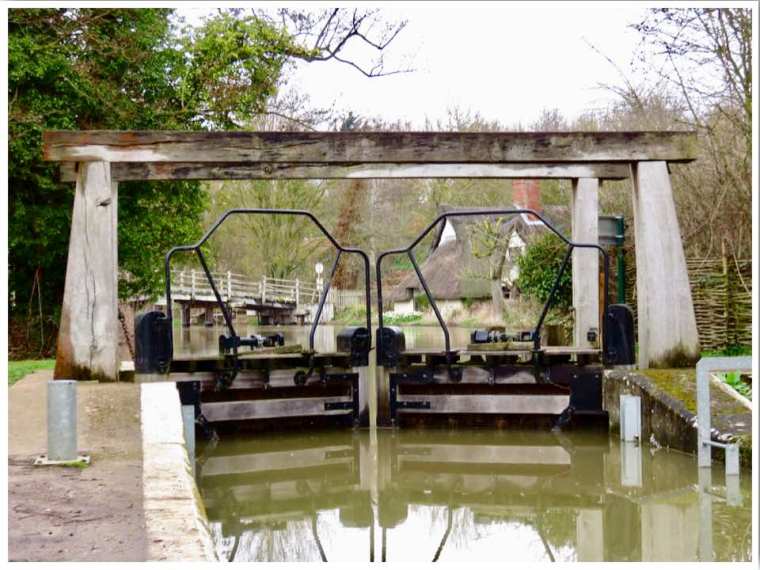 The RSPB Wildlife garden is mainly wood chips, the main lane between Bridge Cottage and Willy Lott’s House is tarmac and the path from the Flatford Bridge heading past the Flatford Lock towards the Manningtree walking route is partly made from recycled crushed concrete so it is possible to still see the Mill and avoid the mud!

How to get to Flatford Mill 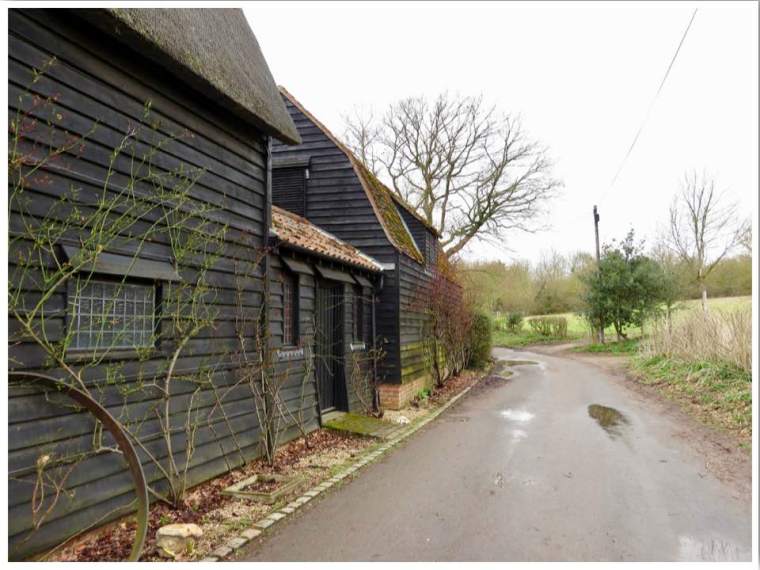 The roads around Flatford are very narrow.  Sticking ‘Flatford Mill’ in iPhone maps will leave you high and dry.  It’ll say you have arrived when you blatantly haven’t, so it was only luck that we managed to find it!  The carpark is in the middle of a one way system and we actually didn’t see any sign posts for the Mill leading up to it!  The website says to use this postcode:

…but I can’t tell you how accurate it is because we didn’t use it!  Parking at Flatford costs £4 per car or is free for National Trust members.  There are no other entrance fees after the parking cost.

There is a free car park in the village of East Bergholt, but it is a 1.6 mile (30 minute) walk to Flatford Mill and to walk there does use the same narrow one way ‘exit’ road, that has no paths, so be careful if you choose this option!

Need other ideas of things to do in the area?  Check out: 10 Cool Places To Go In Essex 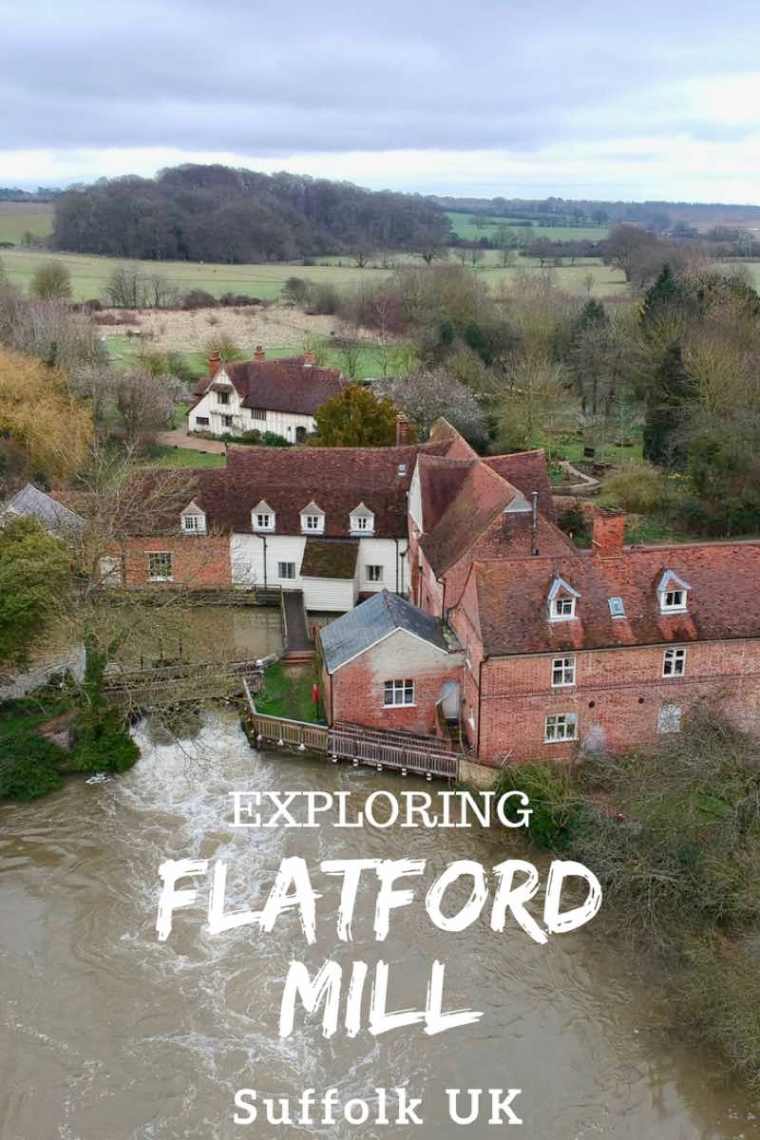 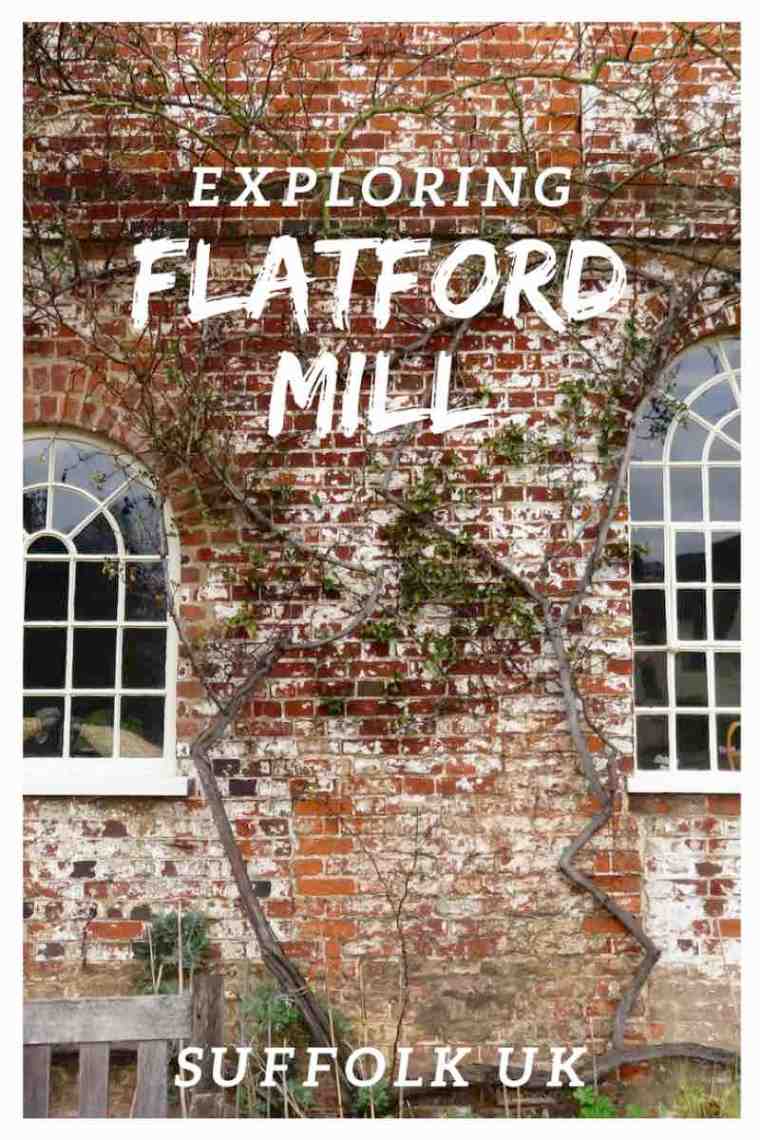