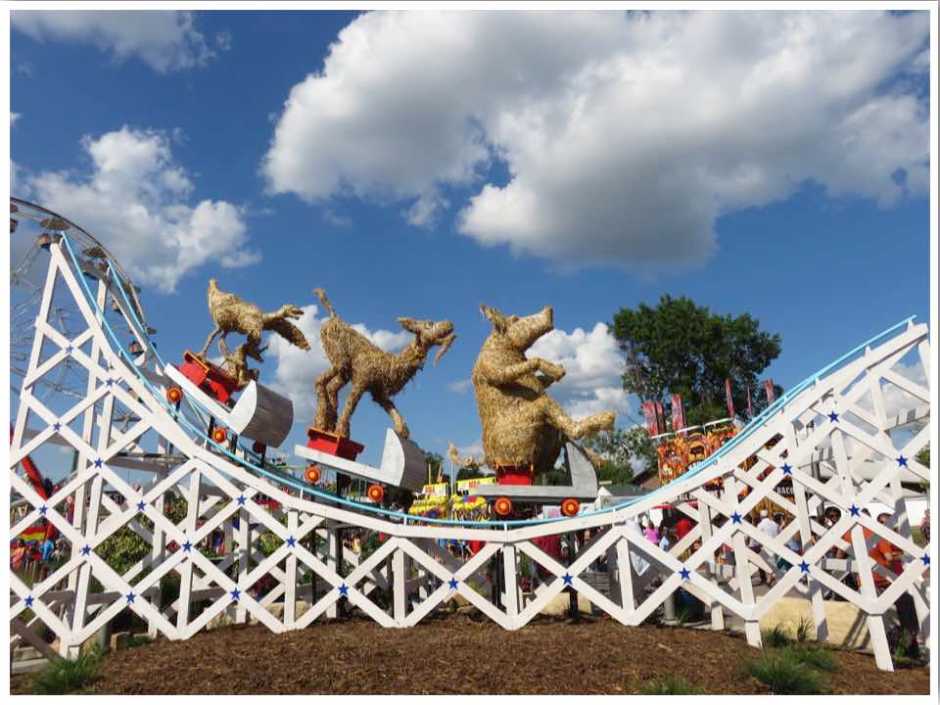 When I moved to Iowa, the Iowa State Fair went straight on the ‘Iowa Bucket List‘.  We don’t have fairs quite like this in the UK and every Iowan seems to have gone multiple times, so of course I wanted to see what the fuss was about!  The fair is located in Des Moines and in 2016 over 1 million people visited!  Here’s what I thought of the 2017 fair as a first timer (for those stats lovers 120,833 people were at the fair the day I visited) my tips for anyone else thinking about visiting the Iowa State Fair!

1. Prepare to Spend Lots of Money!

There’s no getting over the fact that I spent an awful lot of money while at the Iowa State Fair, so I’ll start with a budget breakdown.

Deep Fried Fruit on a Stick: $5

I only had to pay for myself, I could have eaten a lot more, I didn’t even buy tickets for the grandstand entertainment (anything from $27 – $62 depending on who you see), I could have paid $10 to park on site rather than get the bus, I could have bought a return ride for the chair lift, the list goes on!

I always say to myself, if I’m going to go somewhere, I’m going to do the things I want to do.  From Dubuque in East Iowa, it’s a 3 hour drive, I wanted to make sure I do everything I want to in case I don’t have the chance to go back again.

How To Save Money At The Iowa State Fair

I was desperate to have an egg on a stick but I failed at finding it!  I could make my own at home for literally pennies and stick it on a kebab stick but when at the fair everything on a stick sounds so appealing!  I very nearly opted for a Pork Chop on a stick but didn’t really feel hungry enough for it!

As you may have spotted in my budget breakdown, I had a Double Bacon Corndog (a sausage wrapped in bacon, in batter, with bacon bits sprinkled on top – very tasty) and Deep Fried Fruit (pineapple, strawberry, a grape and a slice of peach)…trust America to make fruit unhealthy!  The only way to describe the taste is similar to a fruit pie!

The Sky Glider was something I was desperate to go on after seeing photos of the Iowa State Fair!  There are 2 different chair lifts, I personally think the Sky Glider East gives the best views, especially heading TOWARDS the fair as it finishes along the main walkway in front of the Grandstand.  A single trip is $4, a return is $7.

I’m still not completely used to being surrounded by so many people with connections to farming, other than the farms in the UK that you can visit like a tourist attraction, I don’t think I knew anyone on a personal level that actually was a farmer for a living.  Maybe washing chickens is completely normal, after seeing someone vacuum a cow at the Dubuque County Fair, it really wouldn’t surprise me.  Either way, I planned my day around the Chicken Washing Demonstration.

Turns out it’s quite a complicated process!  1) You give it a bubble bath 2) Wash it in vinegar to get the bubbles off the feathers 3) Then dip it in some blue mix to make it whiter…although if you put in tooooo much blue, the chicken will then go blue too.

The list of events is overwhelming!  It’d literally be impossible to see everything!  I should have made a list or took a highlighter with me or something because I ended up leaving without seeing things I had originally thought I may like to see.  I only realised once I got home and was looking at the map again!

Of course there are animal demonstrations and contests, but then there are arts and craft demos (including $35 for a group painting lesson), music, dancers, hot dog eating contests, baking contests, yoga sessions (at 9.30am…I missed it by 30 minutes!), grape stomping, gardening demos, a classic car show, steam engine demos…the list is never ending!

5. See Farm Animals (Alive or Made of Butter)

Well of course once you’ve seen them being washed…!

My favourites were an elk with massive horns and a small little pig that originates from New Zealand that were in the Avenue of Breeds.  The Swine Barn was, unsurprisingly, full of pigs and small children that had rigged up plastic spiders on fishing lines (?) and were dropping them on unsuspecting victims heads as they walked by.  No one seemed to jump or even notice!  (If this is a fair tradition, please let me know!)

The Super Bull, Big Boar and Big Ram are all on show too!

Everyone’s ‘must see’ is the Butter Cow.  A cow sculpture, made from butter, weighing around 600lbs.  It must have been the sheer volume of people in the building that put me off it a little bit.  I saw it…but I couldn’t wait to get out, I hate people barging in to me. It also just looks like it’s made out of yellow plastic, maybe it would have been more interesting if someone stood next to it and everyone now and then used some to make a slice of bread and butter and have a munch.  (While researching for this post, I found out that the amount of butter on the cow could butter 19,200 slices of bread, so I’m sure a few slices worth wouldn’t be missed!  Most of the butter gets recycled for the following years cow and can be reused for up to 10 years which doesn’t sound that appetising!

6. Don’t Miss Out on the Varied Industries Building

Well I say building, but it kinda seems to spill outside too.  It showcases a big mix of different industries from local tourist boards (yay travel!), hot tub companies, the type of businesses you see on the shopping channel, the Iowa universities/colleges selling their merchandise, car dealerships, I won a free “To Achieve Your Dreams You Need To Be Awake” shopping bag by completing a buzzer game on a stand giving out iced coffee samples.

What’s your favourite thing to do at the State Fair (Iowa or otherwise)?

Found These tips Useful? Pin It For Later!

11 thoughts on “Tips For Visiting The Iowa State Fair!”