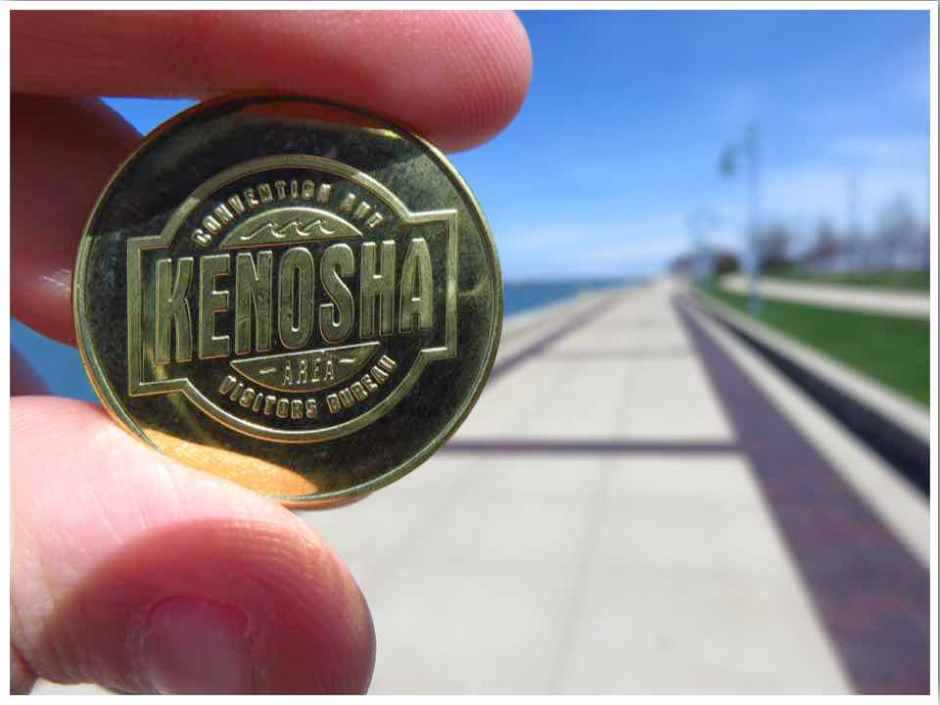 For me, sometimes it’s the silliest of things that attract me to a destination.  For example, I went to Jamaica to go on a bobsleigh track in a rainforest.  I signed up for the Kenosha pre conference trip at the Women in Travel Summit, purely because I wanted to go on a tour of the Jelly Belly Warehouse.  Little did I realise, that Kenosha would steal my heart, I was just about ready to pack up and move into one of the houses along 1st Avenue, that overlook the waters of Lake Michigan.

Disclosure AD: I’ve been a guest of Visit Kenosha twice, receiving complimentary accommodation, food and attraction passes. As always opinions are 100% my own.

Kenosha is the 4th largest city in the State of Wisconsin (population approx: 100,000), just  a 45 minute drive south of Milwaukee.  As mentioned above, Kenosha is located on the west side of Lake Michigan with 90% of its lakefront being public parks, which alone is awesome!  There’s nothing worse than being a water nut like me and not being able to get anywhere near the waters edge!

The Jelly Belly Warehouse Tour is exactly that, a WAREHOUSE…not a working factory.  It is located just outside of Kenosha, in the town of Pleasant Prairie. Everyone sticks on a paper Jelly Belly hat and boards a mini train that does a circuit of the warehouse!

The tours last around 35 minutes, stopping at 5 different ‘stations’ with screens that explain the history of Jelly Belly and how the beans are made. You can also see pictures and even clothing creations that are made out of jelly beans!

Tours are FREE and on top of that, everyone is given a free bag of jelly beans! There’s also a giant gift shop selling everything Jelly Belly INCLUDING the Harry Potter sweet range, a free sample bar and a snack bar.  If you’re lucky, you may also get to meet Mr Jelly Belly!

Kenosha is home to 5 museums!  Being honest, as a Brit, I don’t know too much about the American Civil War. At school we didn’t get taught American history…British history took up a huge amount of the curriculum purely because of the age of the country! I found several aspects of the Civil War Museum very interesting.

First there was ‘Seeing The Elephant’ a 360 degree movie.  Kenosha’s Civil War Museum is home to one of only 3 screens like it in North America!  I didn’t know where to look!  The movie currently being shown at the museum was recorded on 9 cameras in the village of Eagle, just outside of Milwaukee. The museum partnered with a Boston film company and created it using just 3 professional actors and 300 extras!

The Veterans Memorial Gallery is very atmospheric.  It honours US soldiers and veterans from all the different wars America has been involved in.  The room is set out as if soldiers are sat around a campfire under the stars.  The room is dark and completely silent.

The rest of the museum is laid out like a little town with buildings, a riverboat and a train so you can really feel like part of history!  The train exhibit is interactive.  You can sit down next to ‘passengers’ on the train and they will tell you their story! It works on sensors so they only talk when someone is sat next to them!

Ride on an Electric Streetcar

Electric Streetcars have been serving Kenosha since the year 2000. They follow a 2 mile route around Downtown that takes approximately 20 minutes to complete. (The route also passes 3 of the 5 museums).

There are 7 cars currently in operation, the oldest being from 1948! The streetcars have all been restored and have a heating system but no air-conditioning…that’s what windows are for!

In true theme of the Women in Travel Summit, our lunch was catered by Twisted Cuisine, a business that is run by a female and has female chefs!  As well as catering for functions, they have a permanent restaurant too.  They pride themselves on their unique menu (looking at their online menu, they are currently serving a Fruit Loop Cheesecake)!

I received a COOKIE DOUGH pie from Elsie Mae’s Bakery. Let me explain, just to make sure you understand…a pie, filled with cookie dough!! What an amazing combination!! I now need to return to try some different flavours!

Sandy’s Popper is a gourmet popcorn shop.  I tried the Silly Rabbit flavour which is brightly coloured popcorn which comes in a bag of mixed: apple, blueberry, cherry, grape, lemon and orange flavours!

After visiting Vytopna Railway Restaurant in Prague, I have a soft spot for any restaurant that delivers food by miniature railway!  Choo Choo Charlie’s is a fun restaurant to visit in Kenosha!

Other Things To Do In Kenosha

Get Your 10,000 Steps While Enjoying The Kenosha Area

As a huge Fitbit fan and someone that is aiming to do 2,017 miles in 2017, finding a tourism board that actually advertises routes in the area that are 10,000 steps long is brilliant and so creative! On my 2nd visit I did this self guided tour! A 10,000 Step Self Guided Walking Tour of Kenosha, Wisconsin

Being on the shores of Lake Michigan honestly feels like being right on the coast, despite being in the centre of the United States! There’s even seagulls! Kenosha has 2 lighthouses, one is private (photographed at the bottom of the post) but the 2nd, Southport Lighthouse, you can climb up to the top!

Enjoy the water sports Kenosha has to offer

JUST LOOK AT THE COLOUR OF THE WATER!

I need to jump in it. There are places that hire kayaks, stand up paddle boards and paddle boats.

Disclosure: My visit to Kenosha was included as part of my Women in Travel Summit ticket, however all tours and meals were hosted by Visit Kenosha.  Thank you to Laura and MJ for being awesome tour guides! As always, opinions are my own.