As part of an international couple (Brit/American), we had 2 choices in visas for us to be able to live together in America.  We were already engaged so we could have opted for the K1 Fiancé Visa OR if we got married outside of America, we had the CR1 option.  We chose the CR1 visa for several reasons.

We wanted to get married in England.

I’m not completely sure of the K1 rules but I’m pretty sure getting married in a country other than America, isn’t included in it.  So it was ruled out almost straight away.  The K1 lets you enter America but then you have to get married within 90 days of arriving (I’m addicted to the TLC show 90 Day Fiancé!).  A positive with this option is that you actually get to live together for 3 months before getting married.  With the CR1, the only time we’d spent together was on visits, we couldn’t actually live together in the same country.  We had to trust our judgement that we were doing the right thing and would actually get on ok when it came to living together permanently!

The K1 doesn’t let you leave America until you’ve had an adjustment of Status.

This was another big thing for me.  I’m a traveller.  I couldn’t imagine being trapped and not being able to leave the country even if I wanted it.  Thoughts start going through my head, such as “what if there’s an emergency at home and I need to get back?!”.  I believe you CAN apply for a re entry permit but I didn’t want to take any chances on messing up the process just in case I had to leave.  Land of the free?  Not if you’re on a K1 visa.

So I’m stuck in the country because I’m not allowed to leave.  I’m new to the country and have no friends.  I can’t get a job.  What am I meant to do all day?!  No thanks.  Yes the CR1 meant that I was still in England, we had kinda got used to being apart, we knew no difference.  The CR1 roughly took a year from start to finish and I carried on working at my job for roughly half of the process.  This was my choice though, I could have worked right up until the day I left the UK but due to certain reasons, I quit and spent the time living off my savings, spending time with my family and doing a little bit of travelling around Europe.  Thankfully I came from a country without ridiculous health insurance bills and I was living at home so my cost of living was very small.  I’d never be able to quit work in America.  My income barely covers my insurance as it is, it would have rinsed my savings!

Plus, I would have felt like a sponge.  Due to the poor exchange rate at the moment, I left a lot of my savings in the UK until the rate goes back up.  I was able to live off my earnings almost as soon as I arrived!  With the CR1, I was able to get a job straight away.  I even had a job interview the day after I landed and was employed by them within a week!  It was a big weight lifted!

If you would like to know anything else about my visa experience, please let me know!  I recommend this book for in depth details about both of the visa options.  I used it during the process and it was an amazing help! ($29.14 from Amazon) 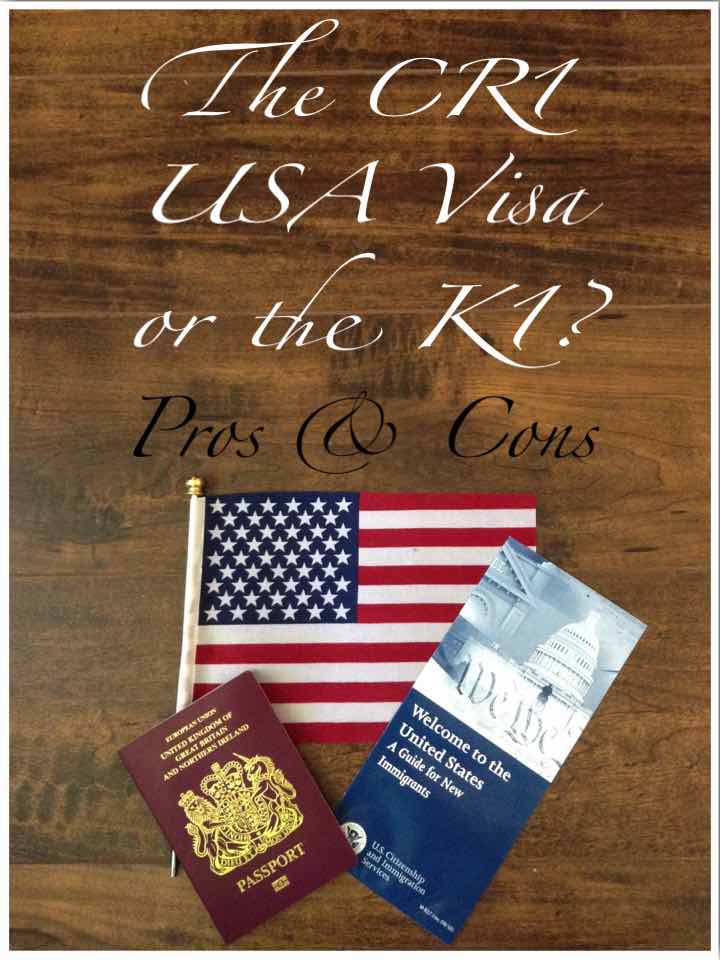 *Please note* Some of the links in this post are affiliate links, which means I will receive a small commission if you make a purchase after clicking.  It comes at no extra cost to you but it helps me with the running of this site!  As always, opinions are my own.