Just like the UK, the USA honours soldiers and veterans on the 11th of November.  As an expat, I find it really strange that there’s no-one wearing poppies.  In the UK, for the 2 weeks leading up to November 11th, lots of places will give out little red paper poppies on a little plastic green stem in return for a donation.  This is to represent the poppies that grew in the field at the end of the World War.  However Iowa has a unique way of its own to honour veterans!

Artist Ray “Bubba” Sorensen II, has been painting murals on giant boulders since 1999.  The first of his creations, the ‘Freedom Rock’ in Menlo Iowa, is the biggest (weighing over 60 tonnes/12ft tall) and gets repainted with a different mural each year ready for Memorial Day in May.  Ray’s aim is to have one smaller rock (around 10 tonnes) in each of Iowa’s 99 counties, with the aim of honouring veterans and promoting tourism within Iowa.  So far 52 of the counties have completed rocks, with around 10-12 new ones being created each year, that would mean each county should have a completed rock by 2023!  Dubuque county’s is in Epworth, just off of Highway 20, right in front of the fire station.  It includes inspiration taken from local veterans.

The site has a commemorative bench and plaque, along with an area of engraved bricks that people could buy and dedicated to veterans that have both passed away and are still living.  It’s surrounded by flagpoles bearing the State and Country flags too, it’s all very patriotic.

I think it’s in a perfect location in Epworth.  It’s right on the hiking trail route that runs around the edge of town.  There are benches, outdoor gym equipment and the path is wide enough for cyclists, walkers and double buggies to all pass each other at once!  Whenever I take that walking route, I always swing by the rock and just stop and look at the pictures and read some of the engravings on the bricks.  I hear there’s even a Geocache hidden around it somewhere, so my next aim is to find it!

The future aim is to have a rock in each of the 50 States!

Other Veteran’s Day (11th Nov) Celebrations in the USA

I now work in a school and they are holding a Veteran’s Day Assembly.  It includes: flag bearers, pledging to the flag, singing the national anthem, different year groups singing Veteran/living in america songs, readings, gun salutes and handing out thank you cards to local Veterans that are attending the assembly.  When I was a school kid, all we had was the poppy sellers coming round each classroom (always a highlight!) and then the 2 minute silence.

As far as I’m aware, there is no 1 minute silence at 11am either.  In the UK, everyone will stop and be silent…the radios stop playing music, the main TV channels will go quiet and even supermarkets will announce a 2 minute silence and everyone stands still.  One year when I was driving along on a main road someone suddenly anchored up in front of me so I had to slam on my breaks…turns out they were wanting to stop for the 2 minute silence…just a shame they weren’t in a more sensible place!

Related reading: 15 Things To Add To Your Iowa Bucket List!

Have you seen any of the Freedom Rocks in Iowa? 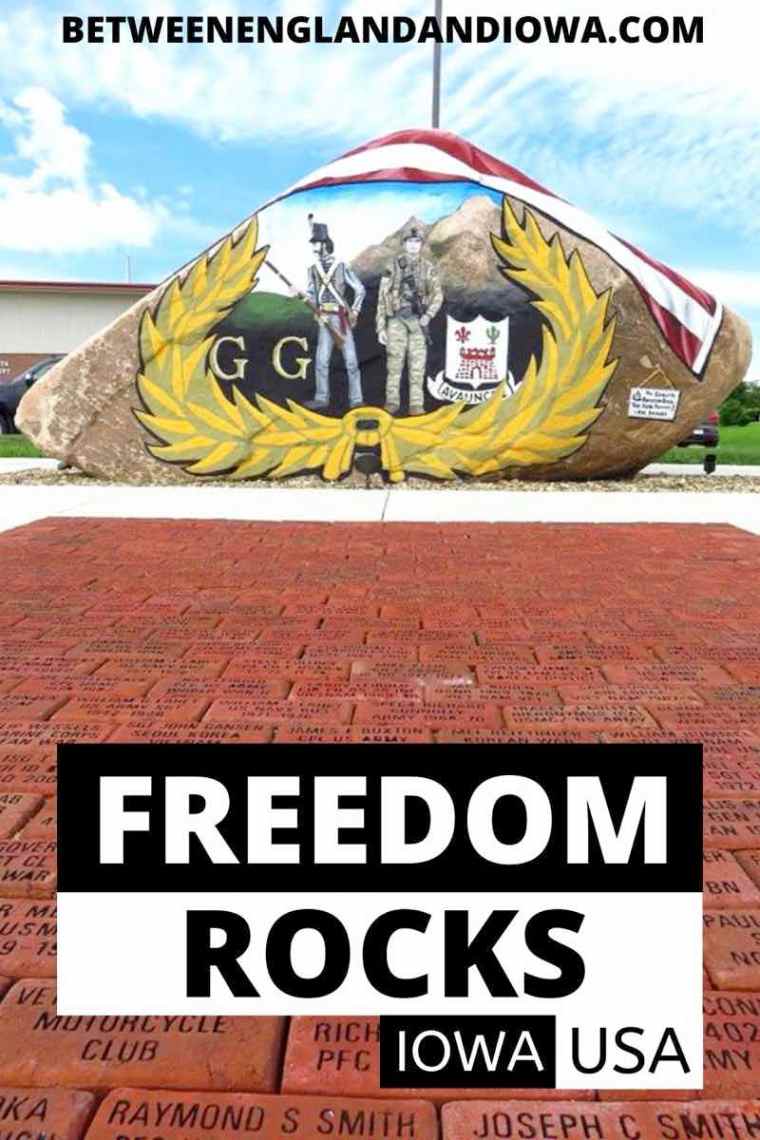 2 thoughts on “The Story of the Iowa Freedom Rocks”