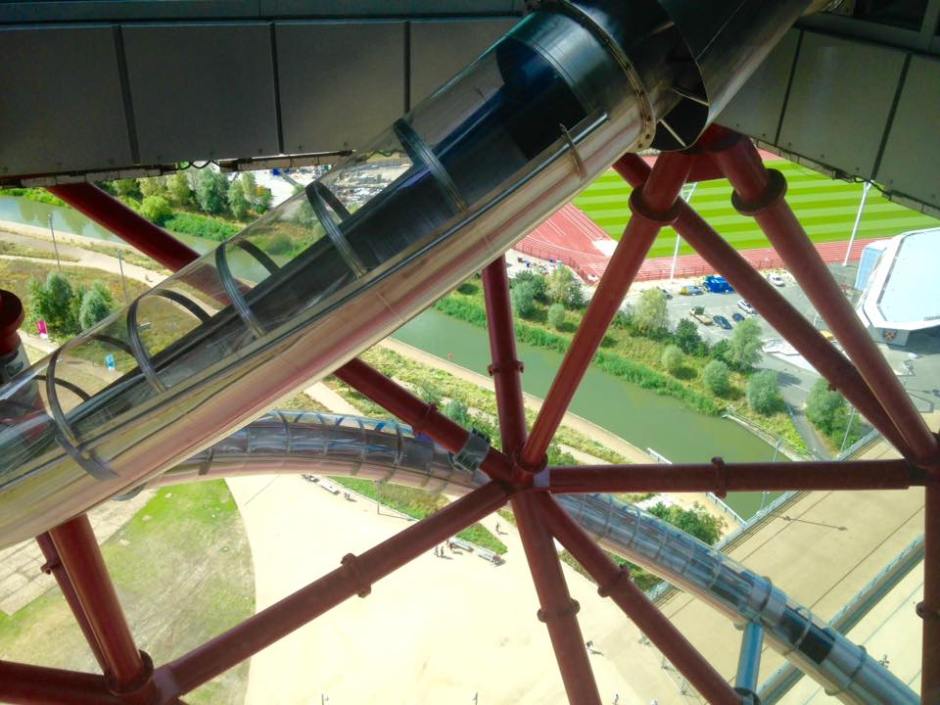 4 years ago London was home to the 2012 Olympics.  I watched the stadium being built…and then a big twisted red metal structure alongside it.  What on earth was it?  What was the point of something that was so big and odd looking?  But now I think it’s pure genius.  The ArcelorMittal Orbit was the brain child of Anish Kapoor.  He also created ‘Cloud Gate’ (aka the giant reflective Bean) in Millennium Park in Chicago, USA.  Originally the Orbit was just an observation tower, but 2016 saw the introduction of the world’s longest and tallest tube slide, a collaboration with scientist and artist, Carsten Holler.  The Orbit slide was born! 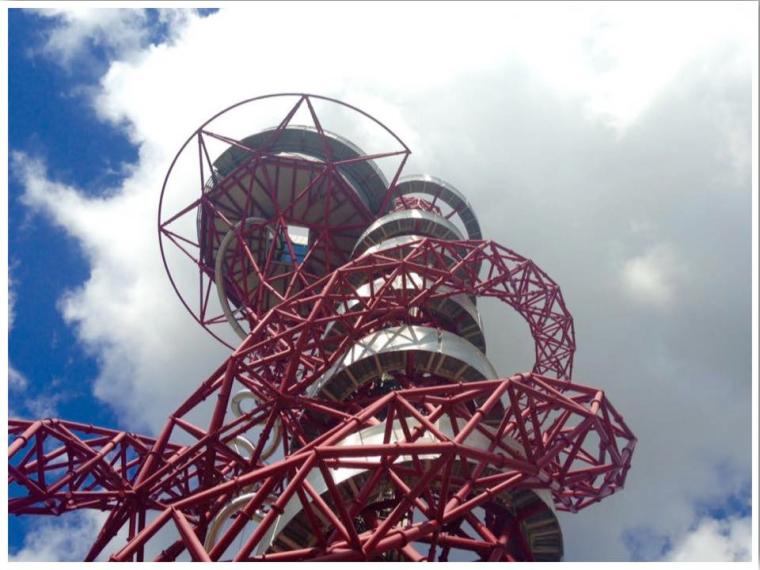 After booking my ticket online, I rocked up at the Olympic Park in Stratford, pumped up and ready to go.  The time on the ticket is the time you can enter the tower, this is not the ride time.  After being instructed to leave all belongings in a locker (outside, at the bottom of the Orbit, a £1 coin is needed but is returned after use)…bags, sunglasses, phones, GoPros…much to my annoyance…I put the key round my wrist and headed to the lifts, there was a little bit of time before my ride slot so I was able to visit the observation platform first.  The lift is awesome, there are little round port holes so you can watch as you whizz up between the crazy structure to the top.

There’s an outside viewing deck on 2 sides and then an inside area with a giant glass window.  On a clear day you can see out over London for 20 MILES!  I was surprised at how many landmarks could be seen!  The O2 Arena, Canary Wharf, The Shard! 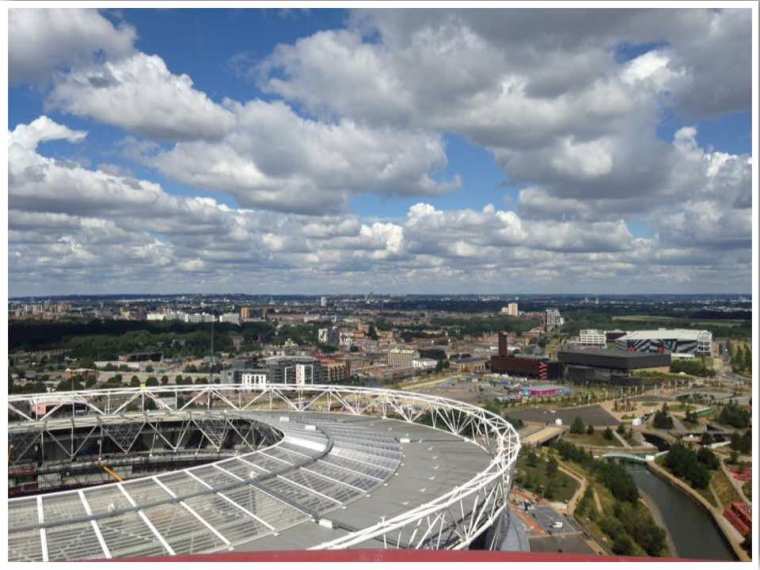 Using the spiral staircase I made my way to the slide platform, to get suited up for my trip down the Orbit slide!  The only way I can describe the helmet is that it’s similar to a wrestling mask.  I looked like a pea head and I’m kinda glad there’s no photographic evidence of it!  It’s like putting on a material swimming hat, it covers your ears, does up under the chin and is even laced up like a shoe at the back so one size fits all.  A lady in front of me actually chickened out of the slide because she found the HELMET too claustrophobic!  Next up was giant arm pads.  I can’t even call them elbow pads!  They went from my elbow right down to my wrist!  Then because I was wearing shorts, I was given 2 knee bandages.

“Somewhere between delight and madness”

Joining the queue, there’s a lot of mixed emotions, some people are excited (like me) and some people look absolutely terrified, which isn’t helped by piercing screams that honestly sound like something terrible is happening!  Even the 2 grown men in front of me…after mocking their partners who went first…screamed the entire way down, at that point I had wondered what I had let myself in for!

The mats are almost like little beds which surprised me, I tucked my feet into the pocket at the end, held on tight to a material loop (no floppy arms!) and put my chin to my chest and waited for the all clear to push myself off down the tunnel!  Yes you read that right, it’s down to you to pull yourself along using a little bar to start the momentum!  15mph might sound slow but when your butt is 2 inches from the metal tube, 15mph is going something!  Your eyes try and focus but everything whizzes by so fast!  There are sections that are clear so you get flashes of brightness and blue sky, alternated with completely dark areas and  sections with little round lights.

A corkscrew has you spinning round and round and round to then shock you by a sudden change of direction that flings you up the side of the tube, I guess these little bends are the causes of the screams but I couldn’t help but just grin like a kid at christmas the whole way down!  My favourite part was right near the bottom where the tunnel gets lighter and you are greeted with a fairly steep section that brings you back down to earth!

I was catapulted back into daylight and the fresh air and asked if I felt dizzy and if I did not to stand up too quickly.  It was something I hadn’t even considered until it was brought to my attention!  It wouldn’t have been very good for my hardcore thrill seeker ‘image’, if I had landed in a heap on the floor!  My sister was spat silently out of the tube a few seconds after me, much to the disappointment of the worker who couldn’t believe there wasn’t a scream out of either of us!  So of course we high-fived our victory that we had conquered the world’s longest tube slide without looking like wimps!

We could have gone back up to the observation deck to spend some more time enjoying the view, but we felt satisfied with our fill so headed off to enjoy the rest of the Olympic Park! 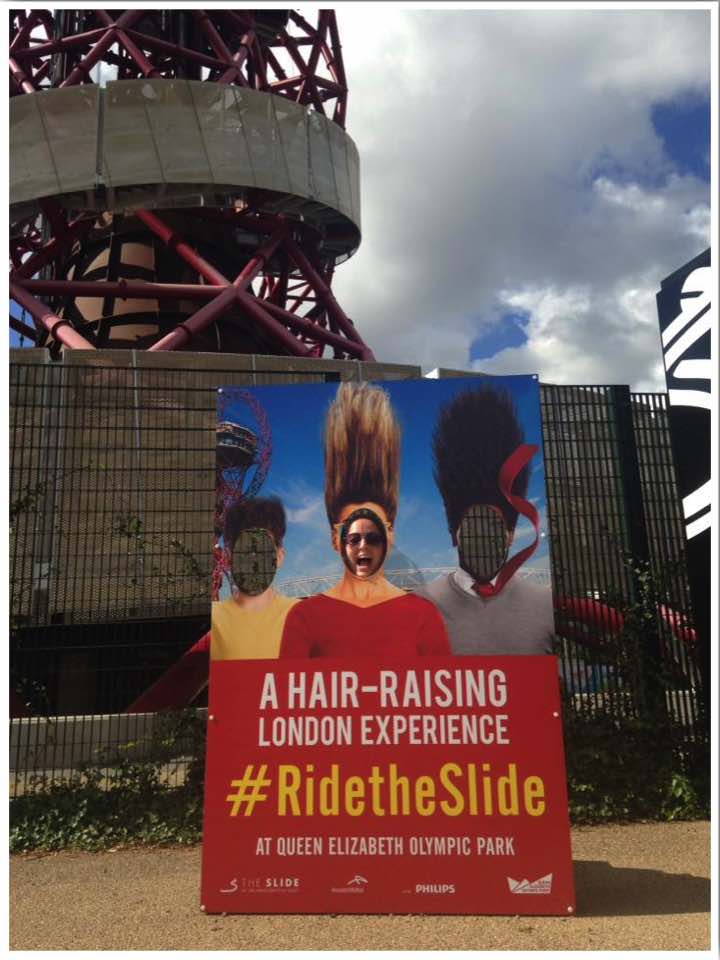 The Queen Elizabeth Olympic Park is right next to the Stratford Westfield Shopping Centre, full of all sorts of shops and restaurants (I recommend ‘Pan N Ice’ for rolled ice cream and ‘Bubbleology’ for bubble tea!).  The Olympic Park is a really nice outdoor space next to the river…well 3 different rivers actually meet in the Olympic Park!  There’s lots of outside seating area, you can hire bicycles and there are often events during the summer.  On certain days you can also abseil down the Orbit!  The Olympic Park is also home to the West Ham Football Stadium, so please be aware on match days this area will get very busy.

Check out more Unusual Things To Do In London

Is the Orbit Slide something that’s on your bucket list?  Do you think more adrenaline activities should be combined with art installations?  Let me know in the comments below!