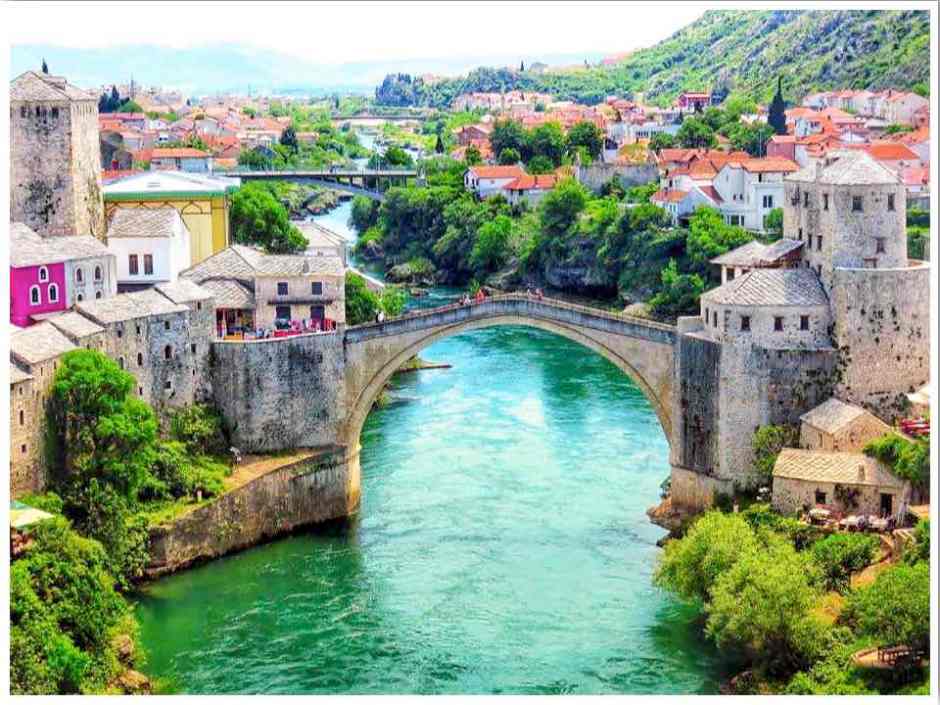 In 1984, Bosnia held the winter Olympics.  After the war in 1992, the bobsleigh track located in Sarajevo got destroyed and is now left as a ruin that covered in street art.  This started my obsession with wanting to visit Bosnia!  Ironically on my Mostar day trip from Dubrovnik Croatia, I didn’t get to visit Sarajevo, but it opened my eyes up to other parts of the country that I had never considered visiting…and I was more than impressed.  It gave me a taster of the country and left me wanting an awful lot more.

When walking round Dubrovnik, day trips to Mostar are advertised EVERYWHERE.  I had pre booked a small group tour before I went, through Viator and operated by Super Tours.

I always like to travel with a bit of the country’s currency so I don’t have to rely on finding an ATM straight away or a shop that’ll accept cards.  After doing some research, Bosnian currency is NOT exchanged outside of the country.  The towns we stopped at during the tour mainly advertised everything in EURO before the Bosnian currency.  They also accepted Croatian.  We were told this ‘exchange rule’: 1 Euro = 2BAM (Bosnian Marka) OR 1 Euro = 4KUN (Croatian Kuna)….times 2 or times 4 depending on what you wanted to use.

Day Trip To Mostar From Dubrovnik

After a 7.30am pick up and a couple of border crossings our first stop was a 15 minute break in Neum, Bosnia’s only coastal town, it cuts Croatia completely in two!  Now reading my tip above, Neum was an exception.  The shop at the rest stop had all the prices displayed in Bosnian Marka, HOWEVER they accept Croatian currency, I asked for my change in Bosnian and they couldn’t do it!!!  The till was literally full up with Croatian Kuna, nothing else!  There was no time to explore, toilet stop and then back on the bus!   The landscape was very very green and hilly, we passed through various little villages, with tiny little roads (with the odd pot hole!).

Passport stamp collectors will be happy, as a Brit, stamps from European countries are a bit of a rarity, but Bosnia gave me some beautiful new black ink!

Medugorje is a town popular with Catholic pilgrims.  We stopped for 45 minutes.  To be honest, it wasn’t a great introduction to the country for me.  It’s home to St. James Church, a fairly modern looking build and the main street was just gift shop, after gift shop, after gift shop, all selling the same religious merchandise.  The town had no charm and I was a little disappointed.  I found an ATM, so at least I’d be able to take away some Bosnian currency as a souvenir! 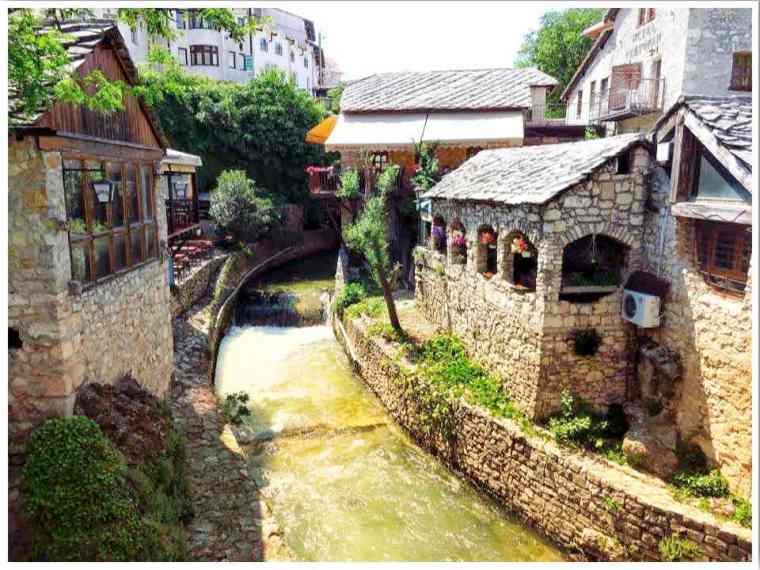 The main stop on the tour was of course Mostar!  My disappointment of Medugorje was completely masked when I set eyes on Mostar’s Old Town!  I find it hard to describe, I found it completely charming and it blew me away!  It’s set in the bottom of a valley, it looks like a little medieval toy town with cobbled streets and buildings made from stone and wood but with the addition of skinny minarets from all the mosques shooting up into the sky.  Don’t even get me started on the colour of the Neretva River!

The first part of our 3 hours in Mostar was a short guided tour of the UNESCO World Heritage Site around the ‘Old Bridge’ Area and the Old Town.  For 1 Euro we watched a video that showed the destruction of the bridge during the Bosnian war between 1992 – 1995.  It was shocking to watch considering we had just marvelled at the reconstructed bridge, buzzing with tourists just 20 years later.  Of course there are still scars from the war, several buildings are still in ruins, over grown by weeds and some have bullet holes in. 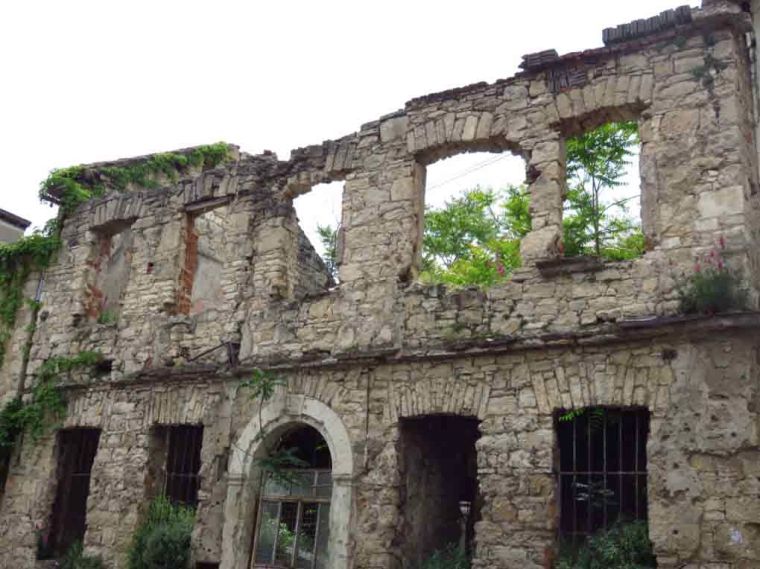 The next few hours I spent wandering around the Old Town just drinking everything in and looking at the cute little shops that reminded me a lot of those in the Medinas of Marrakech, Morocco. 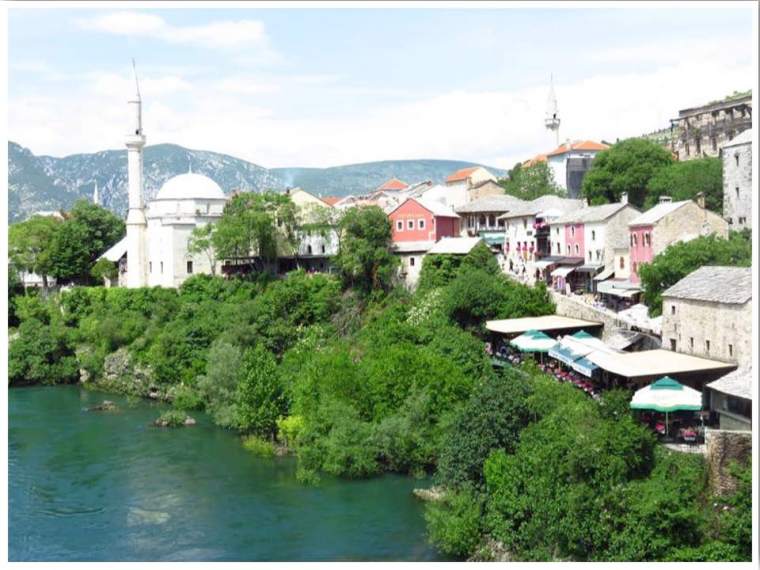 You want to head to the top of the minaret on the left hand side in the image above!  This shot was taken FROM the Stari Most Bridge.  From the top minaret you will get views like my feature image at the top of the post!

I paid 12BAM (£5/$7) to go up the Minaret of the Koski Mehmed-Pasina Mosque, which I was told was ‘the BEST view of the Stari Most Bridge’.  It didn’t lie, the view was pretty special (once you got over the terrifying experience of trying to pass people going up and town the teenie minaret spiral staircase!).  The entrance fee also gives you access to the little garden next to the river too.  It’s one of the only Mosques in town that is open to tourists and there isn’t a dress code.  I wore knee length shorts and a t-shirt and I was fine, there were others that wore a lot less, the entrance just states no swim wear…(WORD OF WARNING: The pay toilets at the Mosque are squat toilets, I had been avoiding them like the plague for 10 years of travelling but I had paid before I realised, I made my bed I had to lie in it!!! There is no where dry to put bags or jumpers so be prepared to balance things on your head…at least the floor gets mopped!) 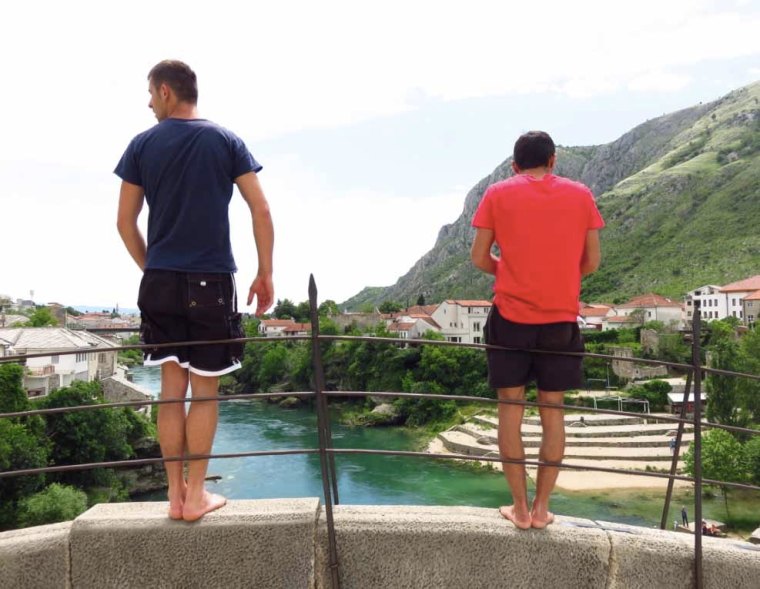 Of course, I loved just hanging around the bridge area.  All year round professional bridge jumpers sit on the edge, hang off the railings, teasing people into thinking they are going to jump, it’s their job so of course they won’t do it until they have been paid enough in donations (think of them a little like street performers!).  The water level is anything between 24 metres and 27 metres from the top of the bridge…nearly 3 TIMES higher than an Olympic diving platform.  The river has ridiculous under currents and the water temperature never gets above 15c/59f even when the air temperature is 40c/104f in the summer!!  The shock can kill amateur divers.

I only really ate cheap ice cream (I had 2 within the 3 hours) while in Mostar, which is kind of bad as it meant that I didn’t really eat all day.  Others in my group used the time to have lunch but I wanted as much time as possible to explore.

The 3 hours flew by and with that, it was onto our last stop in Pocitelj.  Another cute little cobbled town (much smaller than Mostar).  In 30 minutes I managed to climb the city walls (it was free) up to Pocitelj Tower.  It’s mostly a ruin but it is still possible to climb the staircase inside it and look over the village and river, well worth it if you’re feeling fit enough for a quick climb!  There are lots of little stalls selling paper cones of fresh cherries, strawberries or satsumas for 1 Euro each.  Very refreshing on a warm day! 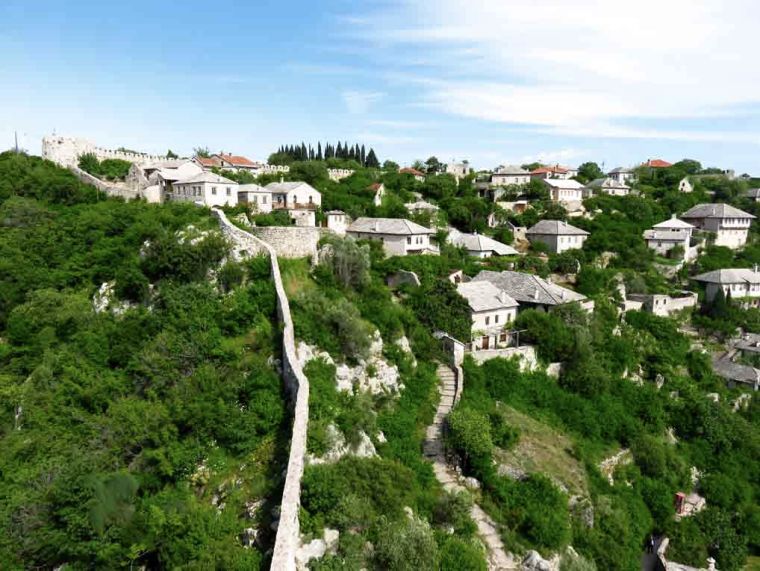 I was dropped off back at my hotel at dead on 7pm.  I thought the 12 hour tour was a bargain.  It cost me just £44/$64.  It may be a long day but a day trip from Dubrovnik to Mostar is definitely do-able!  I visited at the start of May.

A Guide To Lapad Croatia

Is Bosnia somewhere you’d like to visit?  Or would the thought of its war being just over 20 years ago put you off?  Hopefully I have been able to give a rough guide to what the tour involves, I based it on some of the questions that was going through my head before I went on the tour, such as currency, dress code and free time!

Inspired to take a day trip to Mostar from Dubrovnik? Pin it for later! 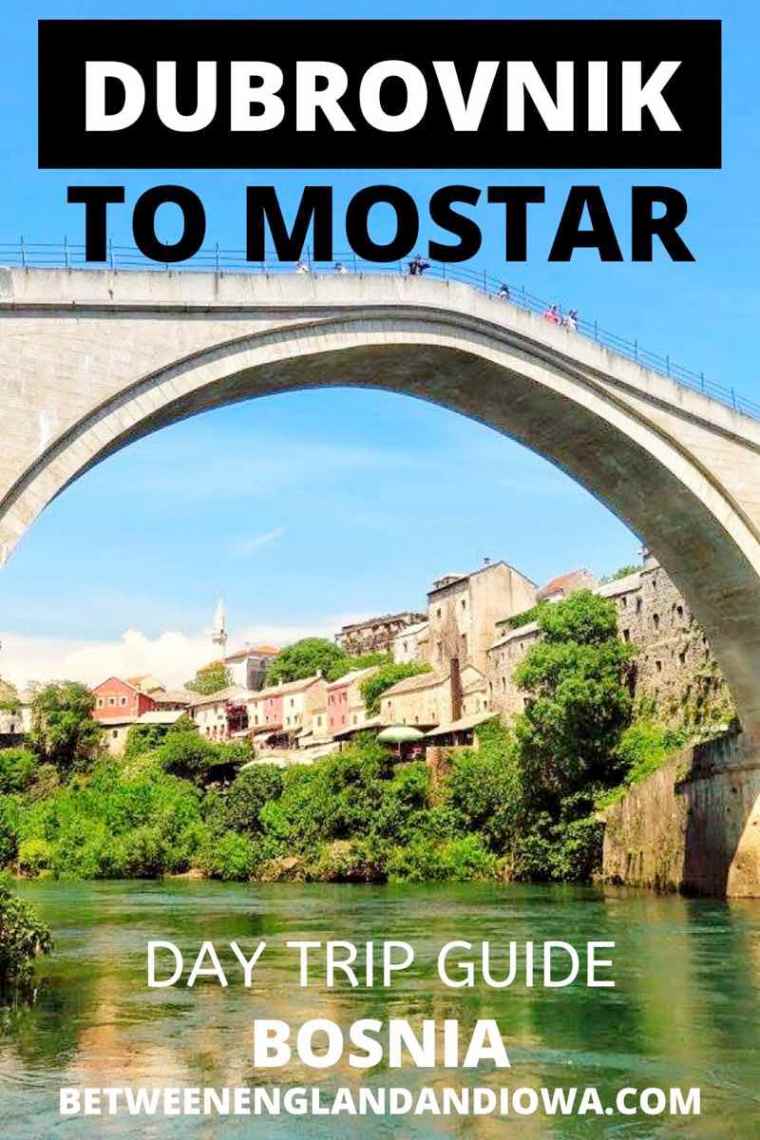 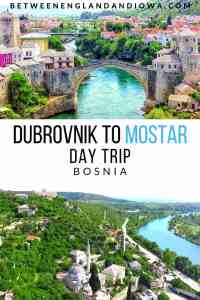 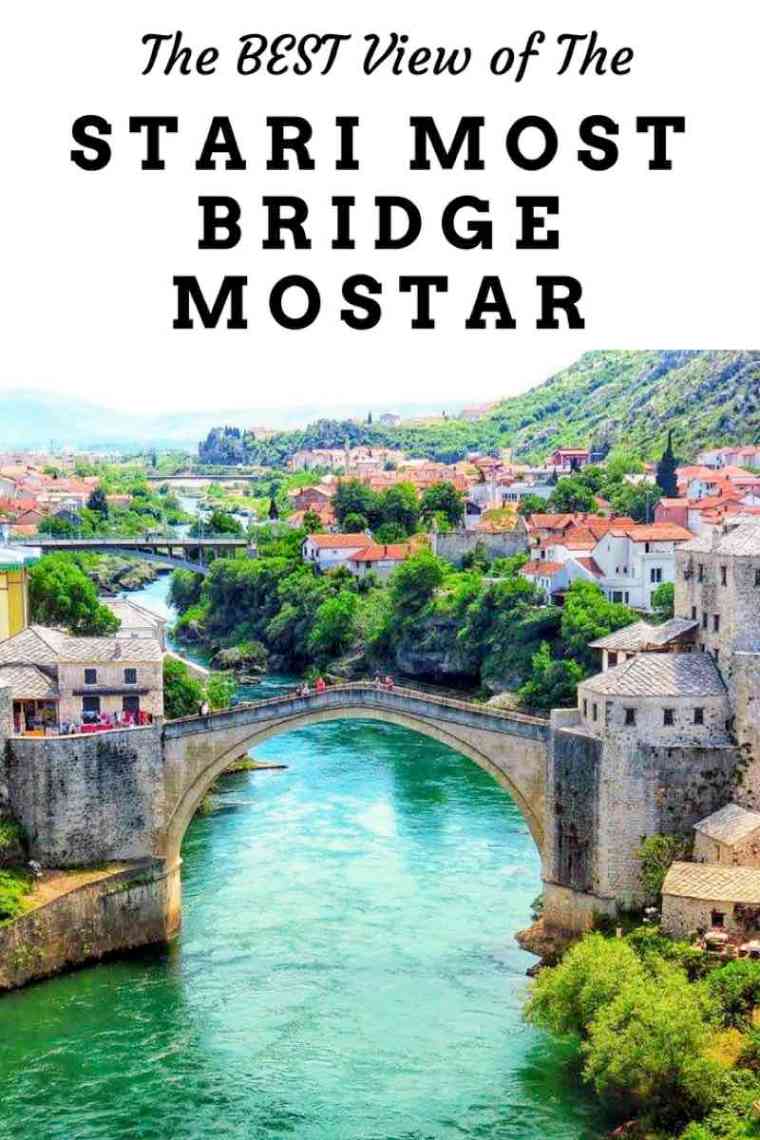