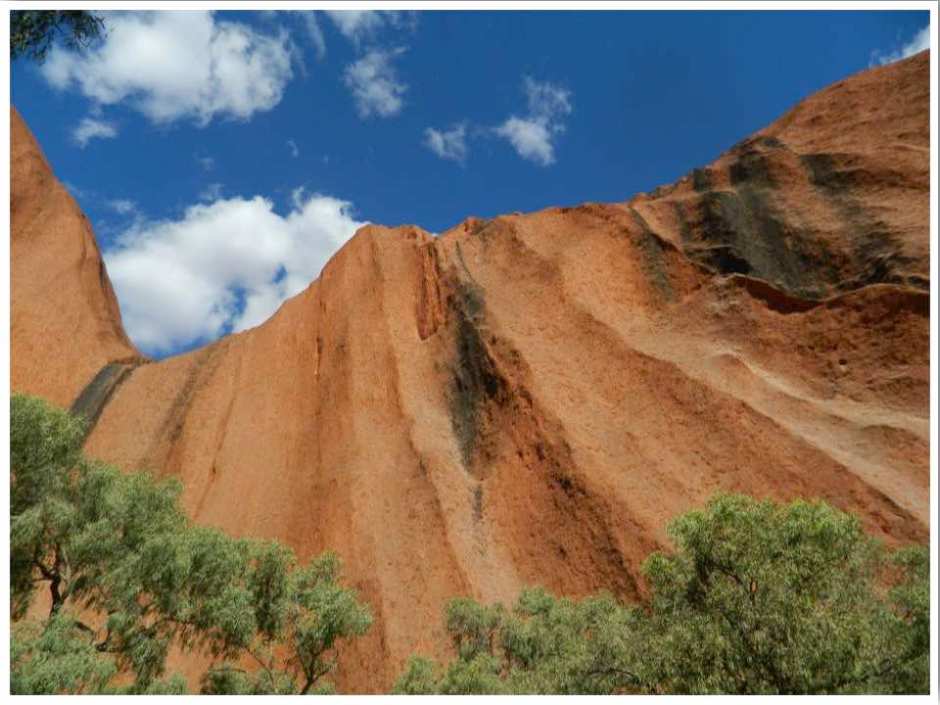 I visited Uluru with my friend because it was on her bucket list.  When she suggested it I was slightly worried that I’d find it underwhelming, like I had with the Grand Canyon in the USA.  All there really was to do there was hike down into the Canyon, I half expected Ayers Rock to be the same, that climbing it would be the only thing to pass the time and I wasn’t going to do that.  But how wrong was I!  Uluru really impressed me, there was so much to see and do!

Things to do at Uluru

Unlike the Grand Canyon, where nearly every view point looks the same, walking around the base of Uluru is full of so many surprises!  There are even lakes that are fed by waterfalls (although the waterfalls only ‘appear’ after rainfall).

Also, because it’s on sacred land, there are lots of stories about various marks and formations on the rock.  As you can see in the picture below, where the waterfall should run, the rock looks black.  There’s one area where water running over the rock makes a red marking, according to Aboriginal stories, this is from where Kuniya the python attacked Wati Liru, a poisonous snake and the red is the ‘blood’ dripping down the rock.  Another example, Uluru is made from sandstone which is generally quite a soft rock, but there are area that have created holes that look like hand or foot holds on a rock climbing wall, it is said that these are from the 2 little boys who first discovered the rock and climbed to the top.  Another part of the rock looks like it is imprinted with 2 pictures of brains, a larger one and a smaller one.  Aboriginals believed that men had big brains and women had smaller ones…!

This part was fascinating and I enjoyed being able to see cave paintings on the walls (I’m slightly obsessed with ‘dot painting’!), yes there are caves around the base of Uluru that you can go in!  At some points around the rock, you are asked not to take photos out of respect but there are more than enough places that it is allowed.

The complete Uluru base walk is 10km long (around 6miles).

Sunset and sunrise viewings are well worth it.  Uluru gradually goes through so many different shades of colour, you can’t help but just stare at it.  Uluru Tour companies even arrange barbecue buffets with champange around the sunset viewing area.  I really enjoyed this experience!

Aside from the main Uluru park area, Kata Tjuta, otherwise known as the Olgas, are well worth a visit!  They are located 44km from Uluru.  There is a hike through the Walpa Gorge that makes you feel MINIATURE!  Just like Uluru, it is another sacred place, it is asked that you stay on the path, don’t swim in the swimming holes and to enjoy the surroundings quietly.

After New York City, Uluru is the most expensive place in the world for a backpacker.  The dorm rooms at the Uluru Resort aren’t cheap.  I stayed at the Outback Pioneer in a 4 person dorm.  I’m not a dorm person but there’s not exactly much partying around so everyone we shared with were pleasant enough.  Yes it’s expensive but staying on the Resort, you have access to swimming pools and free activities, such as; cultural dancing and boomerang throwing lessons! There are plenty of other paid activities available including scenic flights and camel rides. 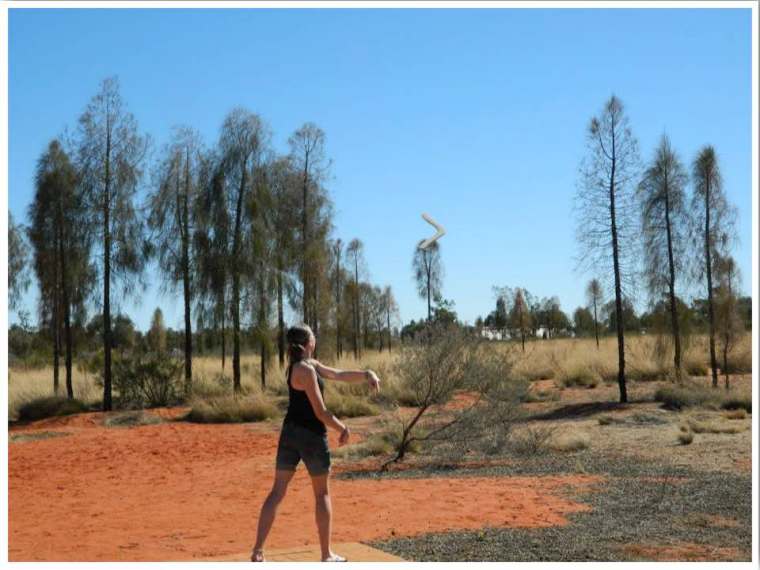 The Uluru Resort isn’t in the boundaries of the Uluru Park, you’ll need a park pass to go up to the base of Uluru.  A 3 day pass is $25AUD for an adult (16+yrs), which will increase to $30AUD in November 2020.  (The tour company I travelled with, included the entrance fee within the cost of the tour).  There is however a Uluru viewing area at the Uluru Resort, where you can see it from a distance (and the colour change of sunrise and sunset).

I saw some amazing wildlife while at Uluru, including this Thorny Devil (which I did nearly step on, so watch where you’re walking!).

Surprising there are loads of camels in this area too.  They are considered feral as they were imported to Australia in the 1800’s as a way to transport people and goods.  After their ‘job was done’, they were released into the wild but continued to breed until their numbers actually started to become a problem!

Climbing Uluru is no longer allowed!

The Rock is sacred to the Aboriginals.  If someone gets injured or dies during the climb, it distresses them and they blame themselves.  When I visited in 2013 there was a sign at the bottom of the climb that advised against climbing Uluru and why.  Rather than dictate and say DON’T climb, it is in their culture to believe that people will choose between what is wrong and what is right.  It’s one thing to climb it, but it’s another for people to get to the top, drop their rubbish and go to the toilet.  It’s a natural icon, why would they have toilets and bins up there?  People should at least have the decency to take their rubbish away with them.  There have been arguments that if they don’t like it, why don’t they close it?  But on the other hand they are then worried that tourists would stop visiting and they rely on the money that they bring in.  Catch 22. 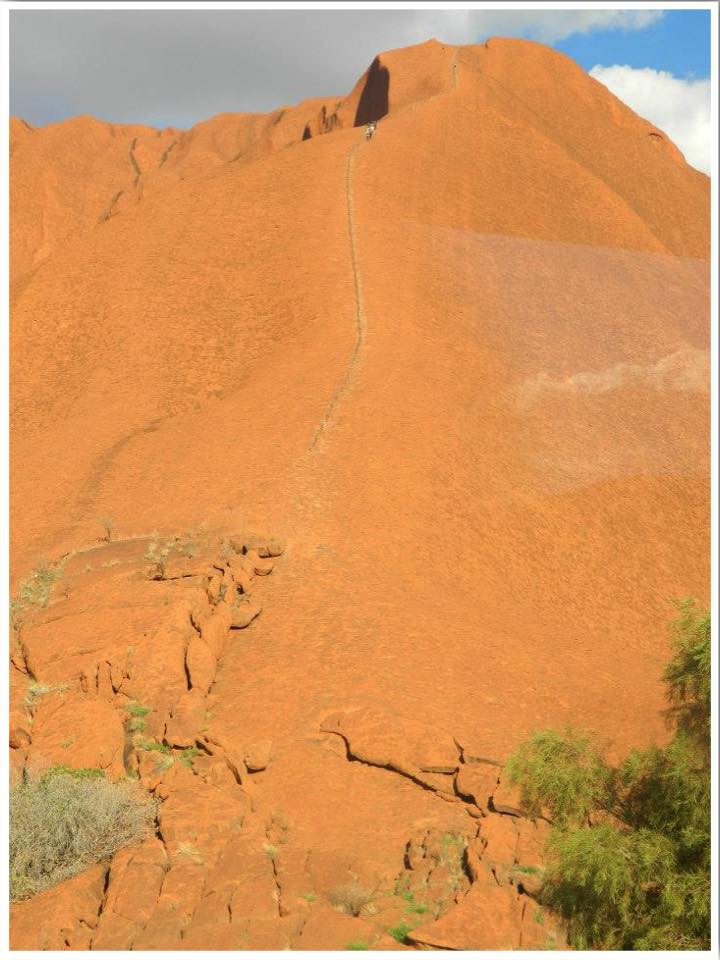 The old climbing route up Uluru

A couple of young school kids that were on my bus from Alice Springs decided that they wanted to climb it and were dropped off at the base of the climb.  You could see that the tour guides weren’t too happy with their decision and even some of the Australian’s on the tour voiced their opinions about how they shouldn’t be doing it.

As of October 2019 climbing Uluru is no longer allowed.  It was put to a vote and decided that as the number of people that climb it now had begun to drop so officially closing it wouldn’t have an affect on tourism.  Over 70% of visitors used to climb Uluru and now it’s more like 30%.  The rock ISN’T a ‘theme park’ after all!  I completely agree with the decision.  If it’s been distressing the locals for this long it’s absolutely the right thing to do.  No one should be made to feel like that in their ‘home’!  When the closing of the climb was announced, people did rush to go and climb it ‘before it was too late’.

If you check out the main Ayers Rock Resort website, it lists a whole range of experiences that can be had at Uluru.  Even since my visit a few years back, the list has got even longer!  Things like yoga retreats (that would be magical!) and Segway tours, I don’t think they have anything to worry about in terms of tourism numbers as they are coming up with new ways to provide visitors with adventurous options!

Here’s a handy tip…if you fly out of Ayers Rock (Uluru) Airport on a flight to Sydney, get a window seat and you get to see a birds eye view of the Rock.  It almost looks like it’s heart shaped from above!

Coming from Western Australia, the best way to get to Ayers Rock was to fly into Alice Springs and then jump on a 1 day Alice Springs to Uluru tour.   They do offer return trips back to Alice Springs that go through the night, but we wanted to stay at Uluru Resort for a couple of nights before flying on to Sydney out of Uluru Airport.

Our tour itinerary went a little like this: we were picked up from our Alice Springs accommodation and given a breakfast bag.  Stopped at Erldunda Roadhouse for a toilet break.  Had a leg stretching break at Mount Conner…which looks a lot like a tiny version of Ayers Rock! Next up was a 45 minute tour of Kaja Tjuta (the Olgas) and the Walpa Gorge followed by a lunch box to eat on the bus.  Then onto Uluru for a look at the Cultural Centre and then a tour of the base.  It is possible to walk round the base independently but the information we were given was really interesting.  Our tour wrapped up with the sunset champagne barbecue!

Our entrance fee to Uluru was included as part of our Alice Springs to Uluru tour.  Even though you can see Ayers Rock from the Uluru Resort, it actually lays outside of the ‘park’, so without being on a tour, you’d need to pay the entrance fee to get closer and walk around its base.

I travelled from Alice Springs to Uluru with Emu Run Tours who offer different length trips to Ayers Rock (plus the amount of food they gave us was AMAZING)!

Other posts about Australia you may enjoy

Inspired to visit Uluru? Pin it for later! 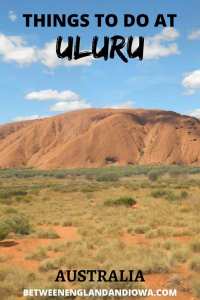 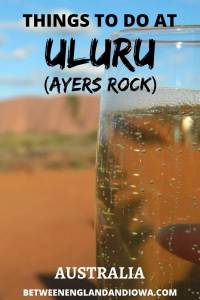 5 thoughts on “Things To Do At Uluru (Ayers Rock), Australia”